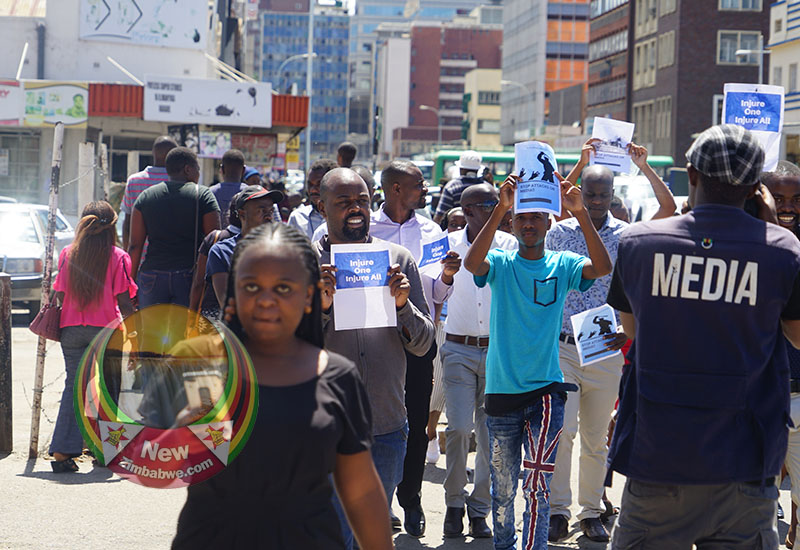 DOZENS of Harare journalists were on Monday harassed by police, coincidentally during a protest against ZRP and Harare Municipal Police brutality against members of the fourth estate.

This comes in the wake of a highly condemned raid on online publication 263Chat’s newsroom by the law enforcement agents in Harare last week.

Some overzealous anti-riot police stormed the publication’s newsroom in central Harare where they fired a teargas canister, injuring one of the scribes.

On Monday, protesting journalists made their way to mayor Herbert Gomba’s Town House office midday to handover a petition.

The petition was signed by more media practitioners calling for action to be taken by council on its rogue officers who were part of the four that attacked 263Chat.

Holding placards and walking on the sides of Jason Moyo Avenue in central Harare, the journalists were granted audience by the mayor who promised action after conceding that it was not council policy for municipal officers to handle firearms or teargas canisters.

During the handover of the petition, senior freelance journalist Tawanda Karombo gave a summary of journalists’ grievances against council.

The journalists then marched to Harare Central police station where they were initially threatened by baton stick wielding officers who initially ordered them out of the station compound.

Efforts to talk to them by senior journalists such as Thomas Madhuku were fruitless as they threatened to beat the scribes up.

More of the officers within the compound and inside a police bus parked outside the station could be heard encouraging ther colleagues to beat up the journalists but members of the media stood their ground.

Some four riot officers then grabbed placards being held by the journalists and tore them to shreds before throwing them into a nearby bin.

An unidentified police Sergeant ordered all journalists to get inside the station where they were made to spend over an hour in a holding bay full of vendors and illegal fuel traders who had been arrested during a police raid.

The officer in question threatened this reporter with a thorough beating for asking how the police was going to deal with the issue of the over 20 torn placards.

Part of the protesting journalists resisted handing over the petition to an unidentified assistant inspector arguing that they were not trustworthy and could tear the petition the moment they left.

After about an hour in the police bay, a Chief Superintendent only named Simbanechako finally arrived but did not immediately address protesting journalists.

He spent some 30 minutes being briefed on the matter before asking for representatives from the protestors.

After the meeting, the Harare Dispol approached the other journalists now at the entrance of the holding bay to give them an address which involved threats of arrest for having conducted the protest without police notification and a lecture on how grievances are to be addressed next time.

He was forced to answer question after question as the inquisitive lot sought to understand actions of the police on the day until Simbanechako told them he had had enough and was not at a press conference.

After a stern cautioning, the journalists were finally told to leave.