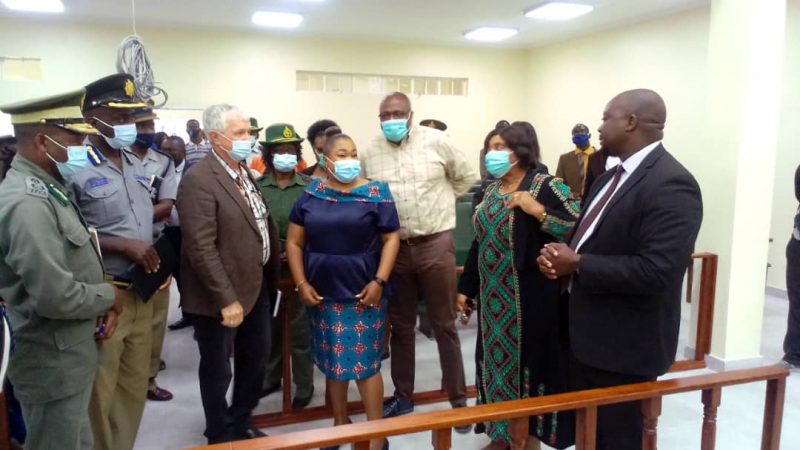 The development, Chikwanha said, would build public confidence in the country’s justice delivery system as matters would be dealt with expeditiously and professionally online.

All courts across the country will be installed with video conferencing systems to facilitate virtual hearings, he added.

“Our case management system is undergoing transformation so that everything is digitalised as we saw here at the new Chinhoyi court. This will be extended to all our courts across the country where we will adopt electronic management of cases to enhance efficiency,” he said.

Chikwanha was speaking during a tour Wednesday of the new JSC composite building in Chinhoyi which is nearing completion.

President Emmerson Mnangagwa is expected to officially commission the state-of-the-art complex next month.

The new court will be the first to be installed with fully integrated teleconferencing equipment to allow virtual sittings, in which lawyers and witnesses will be able to participate in court proceedings from different locations.

This, Chikwanha added, would facilitate hearings in cases in which litigants and witnesses cannot be in court physically, thereby lessening the number of postponed matters due to the unavailability of persons.

Virtual hearings were previously solely for the juvenile courts where minors would be in a remote room while footage from there would be beamed in the main court through a television monitor.

Telecommunications utility, TelOne is installing the e-Justice equipment at the new JSC complex and is expected to roll out the same project at courts across Zimbabwe, said the JSC secretary.

Speaking at the same event, acting Chief Justice Elizabeth Gwaunza said she was pleased with progress at the new building which she said would improve the morale of JSC staffers housed there, lawyers, witnesses as well as accused persons who will face trial there.

“The ambiance of the building brings confidence in the justice delivery system. Employees, lawyers, witnesses, and also accused persons will have confidence in the system administered in such a pleasant environment,” she said.

The giant building, which has transformed the face of Chinhoyi’s central business district, will also have a seat of the High Court.

It consists of multiple courtrooms, offices, a canteen, a library, a police post, among other ancillaries.