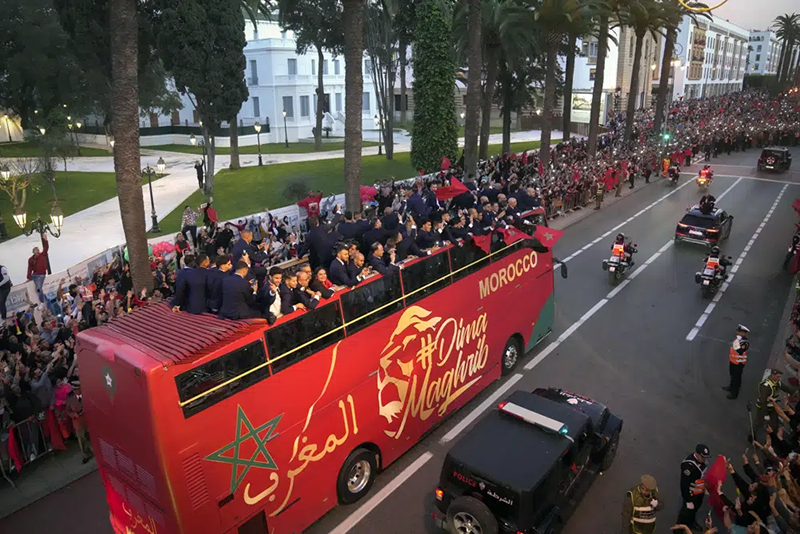 RABAT: Tens of thousands of jubilant Moroccans welcomed their national soccer team home Tuesday after the players exceeded the North African nation’s wildest expectations and finished fourth at the World Cup in Qatar.

Fans packed squares and lined up along avenues and streets in and around Rabat, lighting flares, waving flags, dancing to the beat of drums and cheering as an open-top bus carrying the suit and tie-clad players rolled into the capital with a heavy police escort.

Smiling players and coach Walid Regragui waved, blew kisses to their ecstatic fans and snapped selfies against the backdrop of undulating crowds and swinging palm springs.

At some points along the parade route, the crowds spilled from sidewalks onto a four-lane highway carrying the bus. slowing down the vehicle as it traveled to the royal palace where King Mohammed VI was waiting to receive the players to “celebrate their great and historic accomplishment.”

As the first African or Arab team to reach the World Cup semifinals, the Moroccan team, known as the Atlas Lions, made history and was one of the big success stories of the tournament, the first hosted by an Arab nation.

After the team beat former European colonial powers Belgium, Spain and Portugal, it lost to France in the semifinals. Its record-setting performance led to the players receiving a hero’s welcome.

“Morocco’s run in the 2022 FIFA World Cup will be remembered in the history books as one of the most exciting campaigns since the tournament’s inception,” café owner Reda Ghazi, 27, told The Associated Press. “It was the dream of every Moroccan to win something, especially because Morocco is a country where the passion for football is overwhelming.”

Morocco finished fourth in the competition after losing to Croatia 1-2 in the third-place play-off on Saturday, exceeding the expectations of most Moroccans.

“I still can’t wrap my head around what happened in this World Cup,” added student Anour El Berkaoui, 23. “The team has now set the bar so high that we won’t be happy with anything less than winning the upcoming African Cup of Nations.”

The Moroccan team charmed many Arab soccer fans who saw in the team a reflection of themselves. Players waved the Palestinian flag after their wins and celebrated on the field with their mothers and children.

“As an African team, we broke a lot of records and made the whole continent proud,” Rabat resident Omar Zorgane said .

“Morocco as a whole will gain a lot from this year’s World Cup, from tourism to getting the attention of other countries to possibly hosting one of the biggest tournaments in the world in the future,” he said.