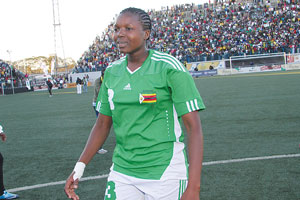 Affectionately known as Mafidi, Machingura passed away on Thursday morning after a long illness as confirmed by the Women Super League.

A product of the Aces Youth Soccer Academy (AYSA), which is credited for grooming some of the country’s finest football players in recent years, Machingura was a key member of the Mighty Warriors side which qualified for the 2016 Africa Women’s Cup of Nations and the Rio Olympic Games.

Machingura first burst into stardom during the 2011 Cosafa Women Championships where she scooped the golden boot after guiding Zimbabwe to the coveted title on home soil.

The gifted forward, who was also employed by the Zimbabwe National Army, also made a name for herself in the domestic league where she starred for Black Rhinos Queens.