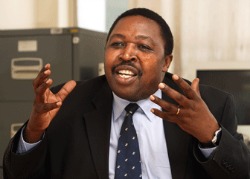 ZIMBABWEANS United for Democracy (ZUNDE) hopes that Zimbabweans across the globe are striving today to create the future we want and deserve. Each of us can help shape our future by 2018 and beyond.
The number of multitudes opposed to Zanu PF and the Mugabe regime is growing by the day. Some of those have recently risen from within Zanu PF itself. Evidently, Zanu PF never intended from the beginning to govern for the success of our people. Sadly, most in the opposition, are concerned more about who shall govern us post-Mugabe and Zanu PF rather than how we shall govern ourselves. Will we live with the idea of someone else other than ourselves moving the country forward? Political parties should and must address this question as a matter of urgency. This is no longer a time for individuals. Rather, it is a time for Zimbabwe.
Zunde Interim Secretary General, Moses Chamboko, recently shared an incisive opinion of what it is to be a leader or member of Zanu PF. He reminded us that Zanu PF’s late Vice President, Simon Muzenda, boldly boasted that Zanu PF supporters are expected to be foolish enough to vote for anything, even a baboon, (well, not literally), but a moron whose leadership inabilities have no precedent .
The prospect of Grace Mugabe being the next dictator after Mugabe is no surprise. Lots of Zanu PF morons are already singing slogans confirming that stupidity. It is not surprising to see people like Philip Chiyangwa parading themselves on social media parroting despicable praises for Grace.
Fortunately, I am not a Zanu PF moron nor donkey. By their very nature, donkeys are so stupid that if they were human beings, they would vote for Zanu PF baboons in 2018. Our future must not be that of donkeys and baboons. Let our collective approach to the noble idea of a grand coalition differentiate us from other animal species, we are well-meaning human beings.
After coming across something on social media that read “sometimes people with the worst pasts end up creating the best futures”, some of us were forced to reflect, seriously. We have had good and bad times in our past, sometimes costing our people dearly in different spheres of life. The best we can do is to show that we owe our people our own lives since we are what we are because of their incredible love and support.Advertisement