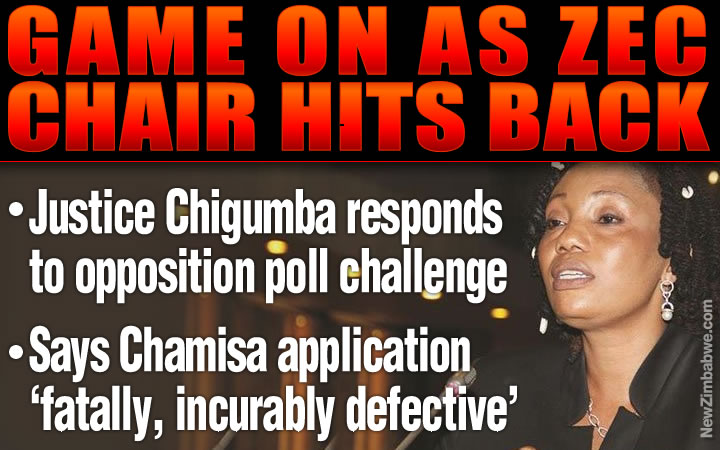 President Emmerson Mnangagwa was declared winner of the presidential election but Chamisa contends the ZEC rigged the result in favour of the Zanu PF leader.

The Constitutional Court (Con-Court) has said it will hear the case on August 22.

In her response to Chamisa’s legal challenge, ZEC chairperson Justice Priscilla Chigumba poked holes into the opposition leader’s case basically urging the Constitutional Court to throw it away on the basis of fatal technical inadequacies.

“No valid application has been filed by the applicant challenging the election of the 1st respondent (Mnangagwa) to the office of the President of the Republic of Zimbabwe, in terms of s93 of the Constitution of Zimbabwe as read with the Constitutional Court Rules, 2016,” Chigumba said.

According to Chigumba Section 93(1) of the Constitution, provides that a challenge to the validity of an election to the office of President is instituted by way of a petition or application lodged with the Constitutional Court within seven days after the date of the declaration of the results of the election. Chigumba adds that the period proscribed by law includes Saturdays, Sundays and public holidays.

“Being peremptorily limited to the period of seven days after the declaration of the result of the election, any filing and/or service that is done outside that timeframe is, accordingly, invalid with the correlative effect of rendering the entire application fatally and incurably defective,” said the ZEC chairperson.

Chamisa, Chigumba added also violated rules of the ConCourt but using his lawyers rather than the Deputy Sheriff as required.

“Thereafter the applicant, through his legal practitioners, without the aid of the Sheriff and thus in violation of the rules of this Honourable Court, purported to serve a copy of that application upon the Zimbabwe Electoral Commission in the evening of the 10th of August 2018,” argued Chigumba.

Chamisa’s errors, according to Chigumba continued: “The defects with the papers received at the 23rd respondent’s offices on the 10th of August 2018 did not, however, end there.

“Upon perusal of the papers purportedly served by the applicant on the 10th of August 2018, it was noted that whilst the single bundle of bound papers was titled ‘Court Application’, there was in fact no court application as prescribed under r16 of the Constitutional Court Rules, (form CCZ1), in that bundle.

“What was in the bound bundle of papers was a cover, a consolidated index, notices of addresses of service and a founding affidavit deposed to by the applicant with various annexures thereto.”

The MDC Alliance presidential candidate however, according to Chigumba, tried to serve the other papers the following day way out of the required limit, again with more errors.

“Further, upon perusing the applicant’s founding affidavit, it was noted that extensive reference is made to a separate bundle of documents purportedly filed together with his application, called the ‘123 Series’.

“That bundle does not form part of any papers received at the Zimbabwe Electoral Commission’s offices either on the 10th or 11th of August 2018. At the time of deposing to this affidavit, that bundle has still not been served on myself; the 23rd respondent or the 25th respondent.

“Further still, the applicants founding affidavit refers, in several instances, to compact discs that are said to be attached to the application.

“No such compact discs were served at the 23rd respondent’s offices either on the 10th or on the 11th of August,” said the Zec boss adding any other evidence or material related to the case not provided to respondents should therefore be declared invalid and subsequently proving fatal to the whole case.

“His application is thus fatally and incurably defective. It ought to be struck off the roll.”