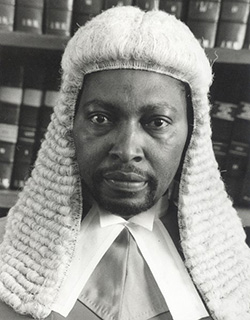 It is indeed ironic that some of the men that were found guilty of corruption by the Sandura Commission, like Nkala and Nyagumbo are interred at the Heroes Acre, having been declared national heroes, and yet the man who bravely conducted that investigation, Justice Sandura, is unlikely to get that honour, his distinguished service to the nation notwithstanding.
THE death of Justice Wilson Sandura, a retired judge of the Supreme Court of Zimbabwe, has been received with much sadness within the Zimbabwean legal profession and the nation at large. To those of us who revered him, and we are many, we like to think of him as the best Chief Justice that Zimbabwe never had.
Justice Sandura was a quiet and understated character who performed the best of his work far away from the cameras and the glare of publicity. Yet he is probably best known to the generality of Zimbabweans for his work in a Commission of Enquiry, which he chaired in the closing years of the first decade of independence – an enquiry which will always carry his name, the Sandura Commission. It is only fitting that this tribute recollects that landmark moment and the critical role that Justice Sandura played.
The Sandura Commission was set up by President Mugabe in 1988 to carry out an in-depth investigation into illegal transactions involving the purchase and sale of motor vehicles from Willowvale Motor Industries, a government-owned company. It was in essence a large-scale and unprecedented enquiry into grand corruption.
During that time, the importation and sale of motor vehicles was a restricted trade and demand far outstripped supply. There was a government facility for the purchase of motor vehicles from Willowvale Motor Industries. The limited availability of this cheap facility and the resulting shortage of vehicles and the long queues of potential buyers combined to create enormous rent-seeking opportunities for those who had access to the government facility.
Those who had such access were government ministers and officials. They realised they could make a lot of money through buying vehicles from Willowvale Motor Industries and reselling to desperate customers at grossly inflated prices, often beyond the government-controlled prices. A whistle-blower soon raised alarm and the scandal was exposed, with devastating consequences for many of those involved.Advertisement