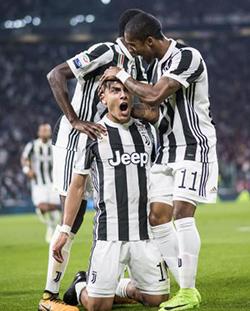 ITALY’S soccer federation (FIGC) has fined Juventus, its most successful team, over an alleged scheme of giving tickets to hardcore fans to buy peace in the club’s terraces.
FIGC had fined the club 300 000 euros ($355 650) and given further fines and temporary bans to four of its executives including president Andrea Agnelli, it said in a statement on Monday.
Juventus said it would appeal against the ruling. It denied wrongdoing and said it had always worked with police to ensure public safety and order.
Investigators had been looking into whether the club gave tickets to fans known as ultras to avoid violence or racial abuse in the stands that might bring fines or docked points.
Such a large number of tickets had been given out over such a long period of time that rules on contributing to fan clubs would have been violated, the FIGC court said, although there was insufficient proof that the recipients were touts or criminals.
“It is no mystery that the entire management was committed to repairing relations with the ultras,” the ruling read.
Agnelli, a scion of the family that owns carmaker Fiat Chrysler, said in May he met the ultras to make sure they did not feel discriminated against, and to avoid “problems of public order”.
The FIGC’s court said Agnelli was not guilty of separate accusations that he knowingly met with a member of the powerful ‘Ndrangheta mafia group who was involved in the ticket scam.
When he met alleged mobster Rocco Dominello – who has denied any wrongdoing – Agnelli was “totally unaware” of any illegality, the court wrote in its ruling.
Agnelli, who is also the head of the European Club Association (ECA), is now suspended from his role at Juventus for a year and will have to pay a 20 000-euro penalty.
The three other officials have been given the same fine and banned from their posts for up to one year and three months.Advertisement