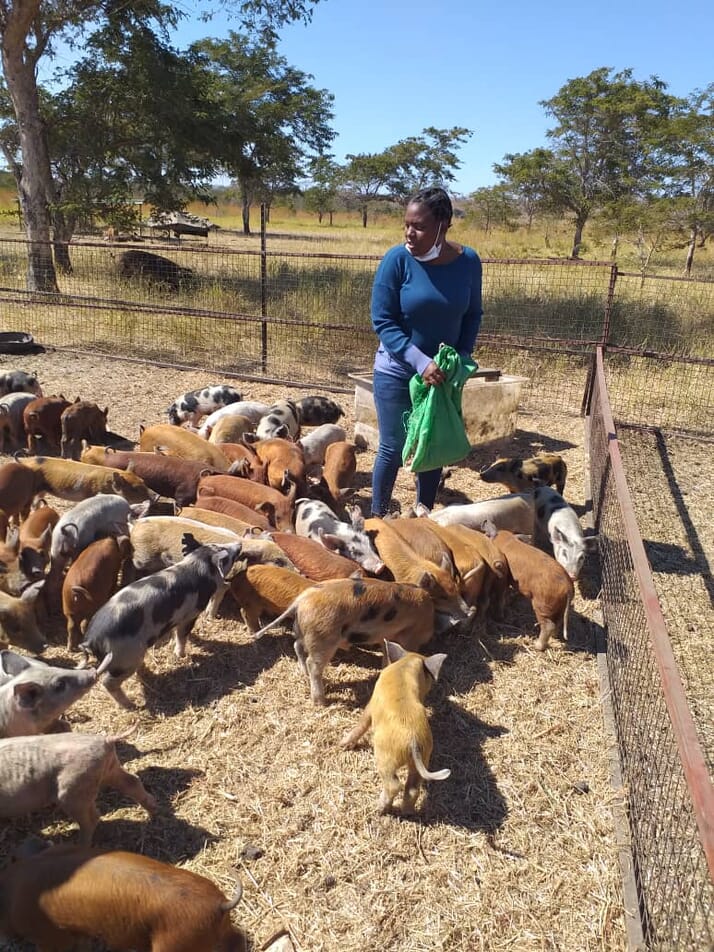 Starting off was not a stroll in the park as she had just two Duroc sows which she had bought from the Pig Industry Board (PIB). She kept returning to the PIB every month to buy two more sows at a time on lay-bye. Instead of getting her own boar, she used the PIB’s extension services to get her sows to start production through artificial insemination (AI).

“I started with a few sows. Recommended ratio of sow to boar is 20:1. I knew if I was to get a boar at that time I would underutilize it, maybe end up losing its mating capabilities. However, I discontinued practicing artificial insemination when I reached a reasonable number of sows,” she said.

The PIB is promoting AI as a cheaper and effective way of improving genetics on one’s enterprise. Apart from improving genetics, it also guarantees that each mating is carried out using viable sperm, which could sometimes not be achieved cost-effectively by natural service.

When she discontinued AI, she introduced a single boar to her sow herd, accelerating her project which she says has helped her pay university tuition not only for her but her two siblings too. Even though she had a job, the proceeds from it could not meet the costs to start up a capital-intensive farming venture.

The inherited land on which all this production is now taking place was a thick forest. She lacked resources to clear it and build the requisite infrastructure.

However, this did not deter Dzirutsa from coming up with a plan to make it productive. She decided to keep mixed breeds, which were cost-effective as they forage in the uncleared land and there is no need to use a lot of money for supplementary feed.

“It just came into my mind several times when I am out and about that I always see pigs roaming around, so why can’t I let the pigs roam around and make it a commercial way of piggery. That’s when I decided to start my pastured pigs project and also putting the knowledge I got from my grandfather to use,” she said.

As much as she would let the pigs forage for food, it was not the same with the weaners which she said needed a boost through supplementary feed for quick growth.

Mixing breeds has allowed her to harness all the desired traits of different breeds to develop better crossbreed ones.

Mukotas are found primarily in Zimbabwe (with an estimated 70 000 pigs), but also in Mozambique and Zambia. They are believed to have been introduced in the 17th century by European and Chinese traders (Bonsma and Joubert, 1952), and are named after the Mukota region of northeastern Zimbabwe, where they were first studied in detail.

Along her journey, Dzirutsa has been hand-held by a local philanthropist and businessman, Killer Zivhu, who not only introduced her to the PIB but also helped her with marketing using his vast online network once the business was up and running. Access to viable markets remains one of the biggest bottlenecks that pig farmers, especially the up-and-coming ones, face but through Zivhu, Dzirutsa overcame the challenge.

“He has always been a mentor and advisor to me,” she said of Zivhu.

The farm which at the moment has a total of 15 breeders with 14 farrowing sows, one boar, 82 weaners and about 30 growers ready for slaughtering has been a work in progress. At one point the farm was getting its water from a source 1,5kms away, but the young farmer has drilled a borehole and erected paddocks.

Dzirutsa, among a growing group of young Zimbabwean farmers who has taken up farming in recent years, employs four people who are helping her pursue her dream.

At some point young, Zimbabweans looked down upon farming, preferring white-collar jobs, but they have now realized that farming can improve their livelihoods. They are rallying each other around a number of hashtags such as #ZimAgricRising, #ZimYouthsinAgriculture, and #ChingorimaSomething (Shona language for ‘just plant something’) on both microblogging sites Twitter and Facebook.

“In the future, I hope to expand my business so I can be a major contributor to the pig industry,” she said.

Her dream is not only to grow her pig rearing business but to also value add by making bacon, sausages and polony among other products. Plans are also afoot for her to establish a butchery and abattoir at the farm and take advantage of the its proximity to Kadoma, a city which is just 2.5km away thus vastly cutting down on her transport costs to the market. Having her own abattoir will also reduce her dependency on the slaughter market.

In addition, she wants to build more decent housing for her workers, electrify the farm, and erect a perimeter fence around the farm.

Dzirutsa urged aspiring pig farmers not to be afraid to venture into the business. Even if they have few resources, she advises, they should be innovative, work with what they have, and forge linkages.

“Do not be afraid to start. Do not be limited by unavailability of resources,” she said.