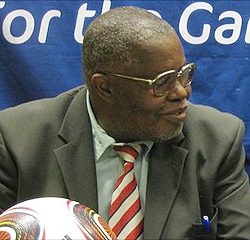 HIGHLANDERS have been given up to July 31 to pay former player Masimba Mambare his $10,000 or risk having their property, including a new 65-seater Marcopolo bus, being auctioned.
Mambare, now playing for Dynamos, was at Highlanders between 2012 and 2013 but was not paid his signing on fee leading to the wrangle.
The property, two buses – the new one and the old minibus – and all the office furniture which includes a refrigerator, four filing cabinets, television set, eight office desks, five office chairs, three computer sets, a printer and four sofa chairs were due to go under the hammer on Friday.
But Ndumiso Gumede, the team’s chief executive officer said an agreement has been reached with the player and his representatives, the Footballers Union of Zimbabwe (FUZ) to clear the debt by the end of the money.
Initially, Bosso had proposed to pay $6,000 immediately but that was turned down with Mambare demanding the whole fee.
Paul Gundani, the FUZ secretary, said they have since released the mini bus.
“At the moment we have released the mini bus so that players at the team are able to go for matches and training and so that we do not paralyze the team.
“We cannot attach all buses because that will end up affecting our colleagues,” said Gundani.
Kaindu braced for Highlanders again
AFTER nearly embarrassing Highlanders in their own backyard last Sunday, Triangle coach Kelvin Kaindu once again face his former employers in a league match this Sunday, but this time around they host them at Gibbo Stadium.
It had to take a Knox Mutizwa second half goal to salvage a point for Highlanders against 10-man Triangle who spent 68 minutes a man short following the dismissal of defender Charles Rukwani.
The Lowveld side had taken an early lead through Pasca Manhanga.
On Sunday, the battlefield shifts to Gibbo Stadium for the return fixture and Kaindu feels the knowledge he has on Highlanders players can carry the day for him.
“I have worked with most of Highlanders players and I know their strengths and weaknesses. That is why we managed to close down Bruce (Kangwa) on their left side,” Kaindu said.
“To me that is an advantage that can help us pull a positive result against them. But I am not saying playing them is easy. It is just that we have a slight advantage because of my knowledge of the players.Advertisement

“They are a good side of course and we have to work hard to collect three points from them.”
Triangle appealed against Rukwanhi’s red card and are waiting for the PSL’s response.
The defender was sent off for wearing under his shorts a skin tight with a different colour.
Kaindu’s side are number two on the log standings.
FIXTURES & Results
Sunday: Whawha v Dongo Sawmill (Ascot), Dynamos v Hwange (Rufaro), Triangle v Highlanders (Gibbo Stadium), How Mine v Buffaloes (Luveve)
Saturday: Chicken Inn 0-0 Caps United (Luveve), Harare City 2-2 Flame Lily (Rufaro), FC Platinum 2-0 Chapungu (Mandava),
Friday: Tsholotsho 0-0 ZPC Kariba (White City)