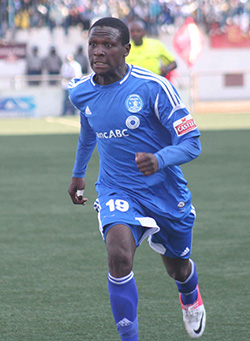 HIGHLANDERS coach Kelvin Kaindu says his charges never came to the party after the latest thrashing by Dynamos in the final of the TM Challenge Cup at the National Sports Stadium on Saturday.
Highlanders lost 4-1 to goals from Simba Sithole, who scored twice in the 21st and 32nd minute, Rodreck Mutuma in the 54th minute and Washington Pakamisa in the 85th minute. Bosso’s consolation came from Felix Chindungwe in the 82nd minute.
“We just failed to play. We had better chances in the first half but when we conceded the two goals we lost focus.
“In the second half, we played badly. We defended badly and we played the offside trap which we don’t normally do and we paid heavily for that.
“This has attracted criticism from fans and it has affected the players,” Kaindu said after the match.
His focus now turns to the league where next week, he returns to the capital to face Harare City after this weekend’s Chibuku Super Cup quarterfinals.
“We would have thought if we had won, it could have given us a slight advantage going back to the league programme but unfortunately, the cup is gone.
“It is negative to us to fall in such circumstances, but we hope to rise in the next game we play,” the Zambian national said.
All four Dynamos goals were a result of poor marking by the Highlanders defenders which left gaps at the back on numerous occasions.