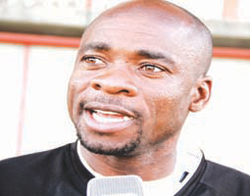 HIGHLANDERS coach Kelvin Kaindu says the Premier League title will be decided by head-to-head matches between his club and the leaders Dynamos and Harare City.
Highlanders fell four points behind Dynamos and two behind Harare City after their 1-0 defeat to How Mine on Sunday.
But with nine matches to play, Kaindu insists his men – who missed out on the title last year on goal difference – can still overtake the leaders.
“It’s still a long way to go, nine games to be exact,” Kaindu said on Tuesday.

“The other good thing for us is that we are still to play the top two sides.”
Kaindu knows only Buffaloes and Harare City have scored more goals that his team, and only Dynamos have a better defensive record.
The Zambian coach insists his team is well-equipped to stop Dynamos from retaining the league title, even as the defending champions beat neighbours CAPS United 1-0 on Sunday to stay on course.
Dynamos may have the advantage but they are not celebrating either.
Veteran striker Murape Murape said: “Beating CAPS was one of the biggest hurdles that we needed to clear, but the journey continues because we have some equally difficult games ahead, most of them away.
“It’s easy to climb to the top of the table but always difficult to stay there but we will try to keep our eyes fixed on the title. We have come a long way and the distance left is now shorter.
“We need consistency and ruthlessness, concentrating only on collecting maximum points. There is no need to be big-headed because we are not champions yet.”
Remaining Fixtures for the Leaders:

SHABANIE vs CAPS UTD; CHICKEN INN vs HARARE CITY; BUFFALOES vs HIGHLANDERS; DYNAMOS vs MONOMOTAPA; TRIPPLE B F.C. vs PLATINUM

BLACK MAMBAS vs CAPS UTD; HOW MINE vs HARARE CITY; BLACK RHINOS vs HIGHLANDERS; TRIANGLE F.C. vs PLATINUM; DYNAMOS vs TRIPPLE B

F.C. PLATINUM vs SHABANIE; CAPS UTD vs HOW MINE; HARARE CITY vs BUFFALOES; HIGHLANDERS vs DYNAMOS

CHICKEN INN vs DYNAMOS; HOW MINE F.C. vs PLATINUM; MOTOR ACTION vs CAPS UTD; HARARE CITY vs HIGHLANDERS