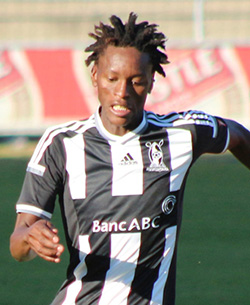 HIGHLANDERS coach Kelvin Kaindu is a man under immense pressure ahead of the Chibuku Cup first round matches at the weekend.
After four games without a goal and losing top spot in the Castle Lager Premier Soccer League after last Saturday’s 1-0 loss to Dynamos, Kaindu knows the hard-to-please Bosso fans are losing patience with him.
And a Chibuku Cup exit against Shabanie Mine on Sunday will not help matters either.
After bombing out of the Net One One Wallet Cup, this is the time to exorcise the cup ghost but with his strikers failing to find the net, the dream might die again.
Kaindu however, said the Dynamos defeat would have no bearing on what happens on Sunday.
“The Dynamos loss will not have any impact into this cup game because every match is different. This will be another day altogether with its own things,” he said.
“We lost to Dynamos but we were not bad in terms of play. This (Sunday) is a cup game and a great amount of discipline is required.
“We need to be at our competitive best. Obviously Shabanie Mine will try to raise their game because we need confidence in the next games where we have a tight fixture.”
Regarding the pressure from fans, the coach said: “Pressure is always there in any match because you are always playing to win.
“We have been doing things right, dominating play but the goals have been elusive. I am sure they (goals) will come soon.”
After a remarkable run that saw him hit the nets 10 times in 15 games, the goals have simply dried up for Charles Sibanda.
Stocky Njabulo Ncube has returned to Bosso, but has failed to score in the last two matches and need to find his way sooner rather than later.
Shabanie coach John Phiri is adamant that Bosso are the favourites in this tie and will fight until the last minute.
“They are under pressure to win, but they are favourites. So we go into the match as underdogs and that is good for the boys,” Phiri said.
However, it is not only Kaindu who is under pressure in Bulawayo. How Mine’s Philani Ncube is facing similar pressure and needs to start winning.
Ncube’s side play Chicken Inn who won for the first time in six matches and will be seeking some form of momentum at Luveve on Saturday.
Chibuku Cup Fixtures
Saturday: ZPC Kariba v Harare City (Rimuka), FC Platinum v Bantu (Mandava), Caps United v Chapungu (Rufaro), How Mine v Chicken Inn (Luveve)Advertisement