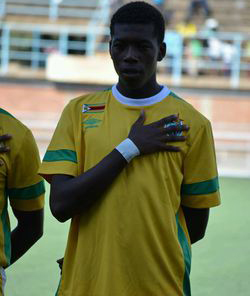 SOUTH Africa: Kaizer Chiefs have welcomed Zimbabwean defender Teenage Hadebe for a week-long assessment as they seek to widen their options at the back ahead of the start of the new season.
Hadebe is currently on loan at Zimbabwe defending champions Chicken Inn from parent club Bantu Rovers and has now been invited for trials at Chiefs.
The 20-year-old is a towering left-footed central defender who is not only steady at the back but also effective on set-pieces.
Last year he trained with Ajax Cape Town where he impressed but then was not signed after negotiations broke down.
He is now due to spend a week with Amakhosi who still have an option of signing and registering a fifth foreign player after Willard Katsande was issued with his permanent residence permit. Katsande can now play as a non-foreigner this season.
Hadebe’s representative Gibson Mahachi has confirmed that Hadebe is already at Naturena.
“He arrived in Johannesburg on Sunday and linked up with Chiefs yesterday,” Mahachi tells KickOff.com.
Hadebe has been capped at senior national team level for Zimbabwe.
Chiefs currently have Daniel Cardoso, Lorenzo Gordinho, Erick Mathoho, Ramahlwe Mphahlele and the transfer-listed Siyanda Xulu as their options in central defence, though Mathoho has an ankle injury at the moment that he picked up at the Rio Olympics.
Chiefs kick off the new season with a short visit to Bidvest Wits on August 23.Advertisement