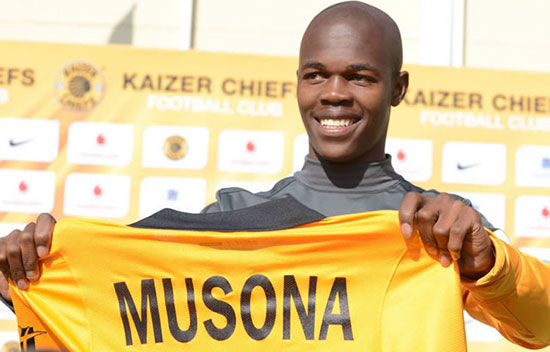 AFTER several trialist who failed to make the grade at Naturena, could Kaizer Chiefs be looking at bringing in a former star?
Coach Steve Komphela has made no secrets about his pursuit for a prolific goal scorer, and after failing to lure a striker of note during the now concluded 2017 July/August transfer window, reports suggest that Amakhosi could target their former player Knowledge Musona.
The Zimbabwean developed into a fan favourite during his time at Chiefs, and most recently returned to the club on loan in 2013, before eventually moving on to Belgian club KV Oostende.
While Musona has enjoyed a largely successful time in Belgium, reports indicate that a return to South African shores could possibly be on the cards for the Zimbabwe international with Chiefs a likely destination for the player, should his club agree to cash in on his services.
Nonetheless, it remains to be seen where the 27-year-old’s future lies, but if Oostende do agree to part ways with their attacker then the Glamour Boys will be allowed to make an offer during the 2018 January transfer window.Advertisement