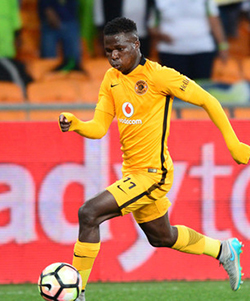 KAIZER Chiefs newcomer Edmore Chirambadare says his confidence will play a huge role in determining how his first season at the club turns out.
Confidence is an anthem in the Chirambadare family that has had four footballers breaking into the Zimbabwe Premier League from his late father Peter through to his cousins Stanley, Ernest and Shepherd.
Along with that he has found the courage to rise from working as a barman in his hometown of Gweru through to getting over trials that brought nothing at Bidvest Wits, to eventually landing a contract at Chiefs after thriving at Tsholotsho and Chicken Inn back home.

“I have adapted and I can tell the supporters to look forward to many things from me because on the field of play if you have your confidence you can do anything. Like you can pass, you can dribble, you can score for the team and I am looking forward to doing that here at Kaizer Chiefs,” says the man nicknamed Spanner.
“The confidence is the most important part because if you have the confidence you will be relaxed on the field of play. Even with pressure when supporters boo you, if you have confidence you can continue with the game and play to entertain them and have fun.
“To be at Chiefs is a good thing and a good achievement for me. To be around these kind of players you can enjoy every moment when you are with them, it is nice,” he says.
Without hesitation the 24-year-old makes it known that his aim is to have Chiefs maintain their position at the top of the standings while he provides goals and assists along the way.
“In football there are ups and downs but for now I can tell you that we will maintain our momentum and we will be on top (come season’s end). They (fans) should expect more from me because that is why I am here. I have a target, as a wing player if I score 10 goals and I assist for at least 15 goals it will be nice for me,” he notes.
Chirambadare has started two games for Amakhosi and is likely to be given a run in the Macufe Cup match against Bloemfontein Celtic on Sunday.