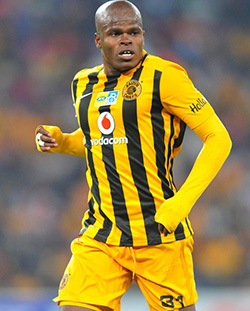 SOUTH Africa: Kaizer Chiefs midfielder Willard Katsande said he had to stand up as a senior player in the 3-2 victory over Polokwane City, having conceded a penalty before scoring a late winner on Sunday.
Amakhosi snapped a seven-game winless run in the league against City via second-half strikes from Bernard Parker, Joseph Molangoane and Katsande at FNB Stadium.
Katsande, however, was grateful to see goalkeeper Brilliant Khuzwayo save a spot-kick from Rodney Ramagalela after he fouled Puleng Tlolane in the area midway through the first stanza.
Ramagalela netted soon after and was joined on the scoresheet by Tlolane in the 82nd minute at Soccer City.
Katsande, who decided affairs with a stunning shot in stoppage time, told SuperSport TV: “Obviously I took the blame for the penalty because I think it was a late challenge, and the referee knows better in terms of the rules.
“As a senior, experienced player I had to pick up my socks and try to work for the team, because I know football is a game of mistakes. I mean if you see players overseas like Sergio Ramos, sometimes he does the same and concedes such penalties and at the end of it he moves forward and tries to help the team win the match.”
The Zimbabwean is hopeful the Soweto giants can build on the result as they prepare to end the year against Golden Arrows at Moses Mabhida Stadium on Wednesday night.
“Obviously we wanted this win to boost our confidence because if you could see in previous games, unfortunately the results were not coming. But we managed to create a number of chances but couldn’t win matches. I think we are going to build on this performance going forward.”Advertisement