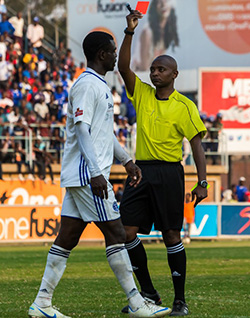 SOUTH Africa: Kaizer Chiefs are among the PSL teams keeping tabs on Cameroonian striker Christian Ntouba.
Ntouba is currently plying his trade in Zimbabwe with Dynamos, and leads the league’s goalscoring charts with 13 goals after 15 games.
According to a source within the Chiefs camp, the management is monitoring Ntouba’s progress at Dynamos, although the club has yet to make a move for the player.
“Of course, Chiefs need a striker, but it’s up to them to make a move,” added the source.
Goal contacted Michael Ngobeni of M Sport Management, who is handling Ntouba’s affairs in South Africa, and he confirmed, without disclosing the names of the teams interested, that the striker is a wanted man in the PSL.
“I have been mandated to market the boy here [in South Africa]. As things stand, there are no offers, but there’s huge interest in his services. At least three or four clubs are monitoring him,” Ngobeni told Goal.
“I’m not surprised that he’s wanted by so many teams. He’s proper. He has scored 13 goals in 15 games this season. Some of those goals were hat-tricks and braces.
“So, I’m not surprised, but then again we’re not in a hurry to find him a club. There’s still about two months left before the January transfer window opens. So, we will see,” Ngobeni concluded.
Kaizer Chiefs boss Bobby Motaung is on record saying that they will deal with the issue of new signings in January, but it looks like they are doing their business quietly behind the scenes.
Chiefs have also been linked with Sundowns striker Leonardo Castro, who has endured a frustrating spell under Pitso Mosimane over the past few months.Advertisement