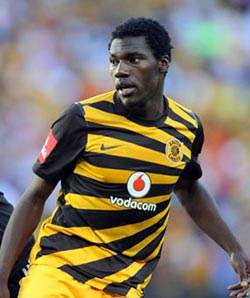 SOUTH AFRICAN giants Kaizer Chiefs will recall Zimbabwe international defender Lincoln Zvasiya from his loan spell in Greece as they prepare for the Caf Champions League.
The former FC Platinum defender has two years left on his contract, and has spent the season at OFI Crete in the Greek top flight.
Chiefs have been drawn against Black Africa of Namibia in the first round and, should they navigate their way past the opening two rounds, they could face Zimbabwean champions Dynamos.
“Lincoln is a top player that we still need as we continue to beef up our squad and seek glory in the domestic league and on the continent,” said Chiefs coach Stuart Baxter.
“We looked at the team and thought it would be best for him to gain more international experience in Europe, but we will be definitely recalling him to come and beef us up as we want a strong team for the Africa’s international Safari. He remains one of our best defenders.”
Amakhosi football manager, Bobby Motaung, believed the 22-year-old Zvasiya had gained enough experience that would add value to the Soweto giants.
“It is good for him to gain experience in a different country because that will benefit the club when he returns. He is still young and it is good for his growth and development as a player.
“He remains our player and we will definitely need him back in the club at some point,” said Motaung.Advertisement