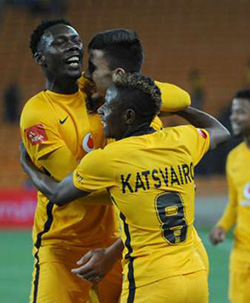 KAIZER Chiefs striker Michelle Katsvairo has faith the goals will come in his first season at Naturena.
The former Chicken Inn man has scored once and provided an assist in four starts and three substitute appearances in the Absa Premiership.
Katsvairo is staying positive as he seeks to build on the goal he netted in a 2-0 win over Free State Stars at James Motlatsi Stadium on October 29.
“All I can say is I’m trying to be a team player and make sure that I create or do something for my teammates,” Katsvairo tells KickOff.com.
“It happened last year when I was at Chicken Inn. I went for the first 10 games without scoring and I was creating for others, and after that the goals started to come. I ended up scoring 14 goals.
“But my aim is I want to be a team player as I have said before. And if I don’t score I will work for the team.
“Bear in mind it is also very hard to open your account, especially when you are a new striker. It was the only thing I was looking for. I’m sure from now on and since the account is open, more good things are to come.”
Amakhosi have struggled for goals this campaign, with defender Lorenzo Gordinho the club’s top scorer with three strikes.