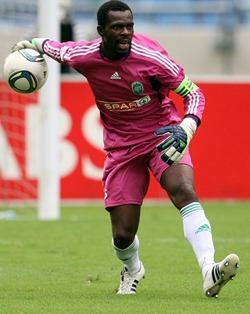 AMAZULU captain and goalkeeper Tapuwa Kapini has admitted a horror mistake in the week which cost his club a chance to go top of the PSL standings but fell short of apologising for the gaff.
According to reports that Kapini got caught in possession in his own penalty area during the away game Bidvest Wits on Wednesday as he tried to waste time in stoppage time at the end of the away match at Wits on Tuesday, handed the home side a last gasp equaliser.
Using his club’s website to explain his actions to AmaZulu fans, the former Zimbabwe captain said: “It’s the worst mistake any goalkeeper can ever make.
“It was not easy even coming out of the stadium.
“I’m grateful for the team because they encouraged me and it humbled me the way the chairman and the directors all comforted me.
“Moeneeb Josephs (Wits keeper) was also surprised to see what happened.
“He said kind words and said I must dust myself off and not let this put me down – this can happen to anyone.
“I must just concentrate on my next game.
“(Others) have been checking up on me every moment since last night whether I’m alright, telling me to be focused and not let these silly mistakes happen again.
“I’d just like to thank the fans that came out (to the) Bidvest Stadium.
“What happened was unfortunate and when given another opportunity I’ll do my best to show them the Kapini they know, by giving a dignified performance,” Kapini added.
But there was no “sorry” for the mistake which saw AmaZulu drop two vital points away.
They share the leadership of the league with Moroka Swallows and SuperSport United, who they host at the Moses Mabhida Stadium in Durban on Saturday.Advertisement