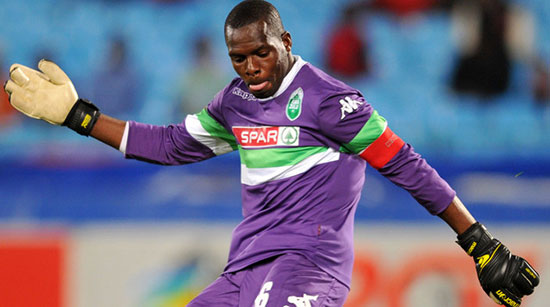 FORMER Warriors captain Tapuwa Kapini has gone a rung down from the SA Absa Premiership after joining National First Division outfit, Highlands Park on a free transfer.
Kapini quit AmaZulu two weeks ago on the close of the mid-season transfer window to enable him to move as a free agent.
He arrived in South Africa from Highlanders in 2007 and joined Platinum Stars before crossing to AmaZulu where he was skipper before the Durban side signed fellow Zimbabwean Energy Murambadoro two weeks ago.
“I am surprised AmaZulu let Kapini go,” a source said. “He’s a very good shot-stopper but we’re not sure if he’s going to be in our side for Wednesday’s match against Garankuwa United.”
The club, nicknamed Lions of the North, is based north of Johannesburg and play their home games at 13, 000-seater Balfour Park Stadium. They are placed 13th on the 16-team log and need points to avoid a chop at the end of the season.Advertisement