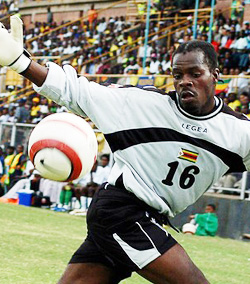 FORMER Warriors goalkeeper Tapuwa Kapini has challenged Warriors coach Kalisto Pasuwa to fix the problems of the senior national soccer team before the 2017 African Nations Cup finals to be staged in Gabon.
Kapinis said the Warriors looked shaky in their defeat to Guinea in Conakry in the 2017 African Cup of Nations qualifier on Sunday, adding that Pasuwa should fix the errors before the January tournament.
The Highlands Park keeper in the South African Premier Soccer League admits that Pasuwa’s men still have a lot of work to do. The former AmaZulu and Platinum Stars net-minder insists that his fellow countrymen must rectify their shortcomings ahead of the continental tournament.
Although they went to Guinea having already booked their spot in Gabon, they succumbed to a 1-0 loss in Conakry.
“I watched that match [against Guinea] and I think we lacked tactical awareness. I do not want to be too critical because I am also a player and I am aware of the challenges that are associated with playing away from home,” Kapini told KickOff.com.
“Maybe knowing that the team has already qualified is something that was at the back of the minds of the players throughout the match.  Look, Zimbabwean football fans will always be demanding and hard to please. Making the semi-finals of AFCON will be very hard but this is football.
“The coach and players need to work very hard towards this objective.”
The 32-year-old Highlanders legend was part of the national team in the AFCON in 2004 and 2006.Advertisement