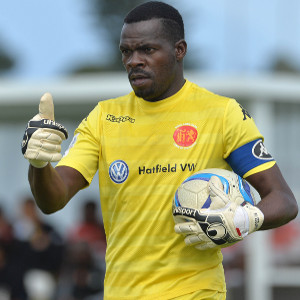 THREE debutants scored and Tapuwa Kapini saved two penalties as Highlands Park started life in the Absa Premiership with a dramatic 2-1 home victory over fellow newcomers Baroka FC on Tuesday night.
Collins Mbesuma and Charlton Mashumba made their debuts for the home side and both opened their accounts, while veterans Thanduyise Khuboni, Eddie Ngalo and Franklin Cale also made their bows for the Lions of the North.
The visitors had an early lead when Zimbabwean midfielder Marshall Munetsi – on loan from Orlando Pirates – converted from the penalty-spot on six minutes to put Bakgaga ahead.
But the home side were level on 31 minutes when Mbesuma found an equaliser from nothing, converting Cale’s free-kick to open his account for the new season.
Baroka were awarded a second penalty by referee Victor Gomes for a handball, but this time home keeper Kapini saved Munetsi’s effort.
Highlands Park took the lead 12 minutes after the break when Mashumba worked some space for himself in the box, received another Cale pass and slotted the ball home.
Then Gomes gave Baroka a third penalty, another for handball, but Kapini once again kept it out, this time from Bakgaga’s skipper Olaleng Shaku.
The result ensures a three-point start for Allan Freese’s side and will be a big boost to the team after their first scheduled match against CAF Champions League representatives Mamelodi Sundowns had to be postponed.