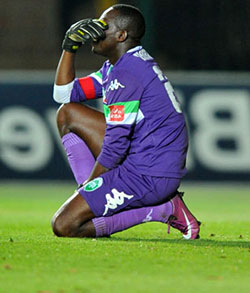 FORMER Highlanders goalkeeper and captain Tapuwa Kapini’s miserable time at the South African Absa Premiership side AmaZulu continued over the weekend after he was assaulted by angry fans following a derby loss.
The stopper was in goals again as AmaZulu, smarting from a 7-1 mauling by Mamelodi Sundowns last Monday, lost the derby against Maritzburg United lost 0-2.
Usuthu fans made their feelings about the goalkeeper known throughout the match, with a group of fans causing havoc near the tunnel at the Moses Mabhida Stadium.
But Kapini could not have done much about the two goals he let in against the Team of Choice.
The first came after a cross in the six-yard area, which Marc van Heerden deflected into his own net, and the second was a lovely curling finish by Thokozani Sehlokong, after a one-on-one with the Zimbabwe keeper.
AmaZulu have now conceded an incredible 11 goals in their last three matches while scoring just a single goal, through a penalty.
Kapini was hit by objects – including plastic bottles – thrown by the fans while making his way from the pitch. The goalkeeper was visibly upset, and lay on the ground in tears until he was assisted by AmaZulu technical staff.
Team manager Japhet Zwane attempted to calm the fans down, telling them the club would not rush into a decision of “sacking the coach”, Craig Rosslee.
In other matches in South Africa, Khama Billiat and Cuthbert Malajila’s Mamelodi Sundowns were stunned 0-1 by premiership new boys Polokwane City.
Elsewhere Washington Arubi and Obadiah Tarumbwa’s Pretoria University were held to a 0-0 draw by visiting Ajax Cape Town.
The former Highlanders and Bantu Rovers forward, Tarumbwa was an unused substitute in the match.
In Europe, former Caps United and striker Nyasha Mushekwi’s Belgian side, KV Oostende finally remembered how to win following a 2-0 away victory over Lierse to move up the standings to 14th. Mushekwi was taken out in the 70th minute.
But the losing streak continued for Mushekwi’s compatriot Vusa Nyoni whose Mons side were beaten 1-0 by Kortrijk. Nyoni was an unused substitute.
In Romania, former Caps United striker Mike Temwanjira’s side, Vaslui also bounced back to winning ways with a 2-0 defeat of Universitatea Cluj. Temwanjira lasted 71 minutes.Advertisement