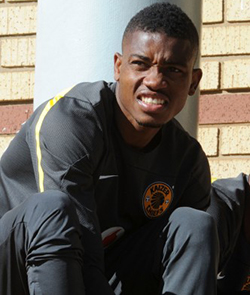 ZIMBABWE international Ovidy Karuru is ready to make regular starts for South Africa Absa Premiership leaders Kaizer Chiefs, according to his coach Stuart Baxter.
Karuru, included in the Chiefs Champions League squad alongside Willard Katsande and Mathew Rusike, has struggled for game time managing just a single substitute appearance – which was a stoppage time introduction against Free State Stars in December.
He arrived at the beginning of the season on a free transfer after having earlier left Belgian club OH Leuven and having also played in France, was expected to easily find his way into the Amakhosi.
“Ovidy came to us unfit and he also had a long schooling before he understood how we play. He has just started now to show signs that he is arriving,” revealed Baxter.
“We need to be patient. These are things that happen within a squad, and whenever you make a signing it is not always someone who is going to go straight in like some would expect.
“You will need to understand that the team a new player is trying to break into has been successful over the last three seasons, so it is not an easy job,” explained Baxter.
Chiefs – 15 points clear at the top of the Absa Premiership table – resume their campaign against Bloemfontein Celtic at Free State Stadium next Wednesday night.