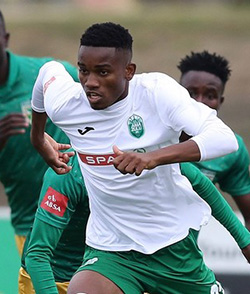 ZIMBABWEAN internationals Willard Katsande, Ovidy Karuru and Mathew Rusike have been confirmed in the 25-man Kaizer Chiefs squad that will take part in this year’s Caf Champions League.
The Chiefs list was officially revealed on Tuesday.
While Katsande and Rusike were obvious names, Karuru, who has barely featured for Amakhosi was a last minute replacement for Kingston Nkhatha.
Nkhatha jumped ship to SuperSport United last week before the January 15 Caf deadline, leaving Chiefs with a slot and Karuru was duly added. Nkhatha had signed a pre-contract with SuperSport to join them on July 1, but Chiefs opted to release him early.
Karuru, formerly based in Belgium, had been linked with a loan move as coach Stuart Baxter sought to give him more game time as there was no place in the run-away South Africa Absa Premiership leaders.
He was a 74th minute substitute in last week’s 1-0 loss to German side Hoffeinheim in an international friendly in Johannesburg.
Rusike played the full match while Katsande was rested as a precautionary measure.
Chiefs will represent South Africa together with defending champions Mamelodi Sundowns, who have four Zimbabweans in their books.
Cuthbert Malajila, Khama Billiat, Kuda Mahachi and Esrom Nyandoro feature for the Brazilians while Warriors and Highlanders legend Peter Ndlovu is the team manager.Advertisement