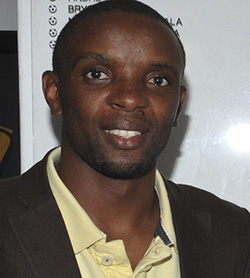 THE late Edzai Kasinauyo was in the crowd for Zimbabwe’s 2019 Nations Cup qualifier at home to Liberia on Sunday before leaving for South Africa apparently to seek medical treatment.
It was the last time Kasinauyo watched the team he loved and once starred for, as the ex-international passed away at Johannesburg’s Donald Gordon Medical Centre on Friday, plunging the nation’s footballing community into mourning.
Former Warriors winger Alois Bunjira says he saw his long-time friend looking jovial at the Liberia game, which Zimbabwe won 3-0.
In addition, CAPS United star Ronald Chitiyo had spoken to his manager, Kasinauyo, on the phone on Thursday as the two sought to close a deal that would see the influential midfielder move to the Absa Premiership.
A memorial service will be conducted in Kempton Park on Monday for Kasinauyo and preliminary indications are that his body will be repatriated to Zimbabwe on Wednesday.
The 42-year-old may have passed away, but he leaves behind a rich legacy, his playing career having embodied persistence, discipline and sheer hard work.
Kasinauyo, speedy and slippery on the wing in his heyday, was never going to be content with a seat on the sidelines once he hung up his boots. His passion for the game would not allow him to.
He was not one to be swayed to take the popular route to the dugout either.
“This was one of the most humble guys I have ever met, fantastic, very good to work with, full of football knowledge and wanting to develop the game in every aspect, especially in junior development,” Zifa vice-president Omega Sibanda told KweséESPN.
Indeed, Kasinauyo was elected Zifa board member in December 2015 along with Sibanda and President Phillip Chiyangwa.
Handed the development portfolio, the former CAPS United star’s stint at Zifa would be short-lived, as he was embroiled in an ugly match-fixing scandal which led to his expulsion in March last year.
Charges that he had teamed up with former Zifa chief executive Henrietta Rushwaya and others in attempting to fix a 2017 Nations Cup qualifier away to Swaziland were later quashed in the courts.
Yet many will relish the passion, confidence and single-mindedness which saw Kasinauyo throw his hat into the ring for the Zifa elections, battling against seasoned administrators and beating them to the lineAdvertisement

That would perhaps be his most enduring legacy as he rose to represent a rare breed of footballers who dare to think big, having the courage and the conviction to run for office in the highest of places.
“Footballers shun administration positions … Edzai did not want to be a coach, he wanted to be part of the administration, he wanted to manage football …” Sibanda said.
Before his election into the Zifa board, Kasinauyo had made his name both as a successful businessman and player-manager through his Tamba Sport Management agency.
Top players such as Willard Katsande, Khama Billiat, Evans Rusike, Tafadzwa Rusike, Blessing Moyo, and Zhaimu Jambo owe their life-changing moves to the Absa Premiership to the affable former Moroka Swallows man.
Rising star Chitiyo spoke to his manager just hours before his death.
Kasinauyo started out with the Black Rhinos juniors, where he first teamed up with Bunjira. His determination to reach for the top was evident even in those formative years.

“I played with Alois for two years in the Black Rhinos U-14s and one year in the U-16s. He was a nice guy, and he had this go getter attitude when playing,” Bunjira told KweséESPN. “I remember when we were in the U-14s and other players were promoted to the U-16s, he also wanted to be promoted. He had to demand to play in the U-16s.
“He always had this kind of personality you know, that what he wanted he would go for it. He had a strong character and I am not surprised he was doing well in business as well. I was also learning from him.”
Kasinauyo spent four seasons at CAPS United before joining the then Cape Town Spurs (now Ajax Cape Town) at the turn of the millennium.
He went on to play for Hellenic FC and Moroka Swallows in the Absa Premiership, and was in the Zimbabwe squad for the 2006 Nations Cup finals.
His retirement from football two years later only marked the beginning of bigger dreams and although his life has been tragically cut short, his legacy should inspire footballers coming up the ranks.