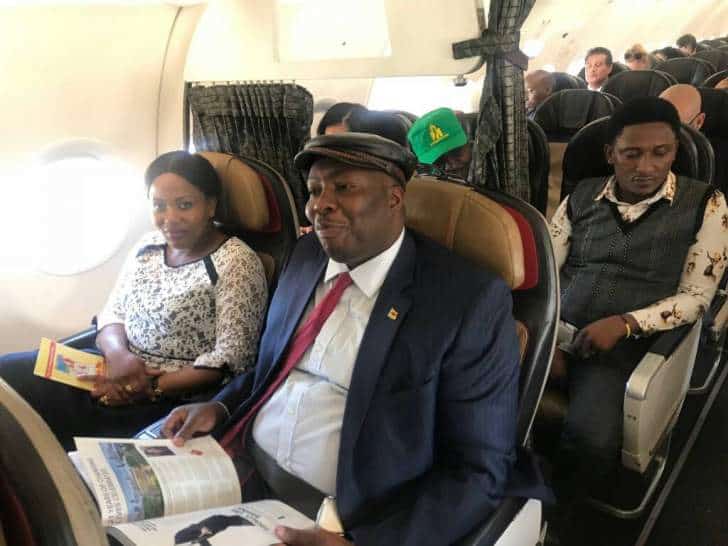 FUGITIVE ex-cabinet minister Saviour Kasukuwere has virtually announced his return to exile through dismissive comments and threats targeted at President Emmerson Mnangagwa whom he describes as a dictator.

In twitter comments he posted from outside the country Friday, Kasukuwere hit out at his former Zanu PF rival he feels has been behind his targeted prosecution leading to the seizure of his $250 000 Nyanga leisure home.

The former Zanu PF G40 kingpin first skipped the country when the military staged a coup against then President Robert Mugabe November 2017 but took a brave decision to return home six months later only to face prosecution for alleged offences committed when he was still in government.

He was joined by ex-ministers Jonathan Moyo and Patrick Zhuwao who have decided to remain in exile, in a country that they have kept secret.

Kasukuwere has since abandoned his trial on alleged abuse of office charges, amid claims he was receiving treatment in South Africa.

Court has ordered the seizure of his home with signs the Mnangagwa administration was keen on tightening the screws on the Zimbabwe strongman’s former Zanu PF rivals.

Kasukuwere Friday took to twitter to express his disappointment at what he feels was persecution against his person.

“Whilst silence is golden, there comes a time when your enemies think you are enjoying it. Abuse of authority and power has limits. God Bless ZW#itsmycountrytoo!” he posted.

The ex-Mount Darwin MP posted again, “I said it will be rough, but it’s gonna be rougher but thereafter we will have a ZW we all want. This monopoly and idiocy shall be challenged. With or without, 2023 is coming. Tatamba zvakwana!”

I said it will be rough, but it’s gonna be rougher but thereafter we will have a ZW we all want. This monopoly and idiocy shall be challenged. With or without,2023 is coming.Tatamba zvakwana!

The once powerful politician is among a handful of former cabinet ministers linked to a rival G40 faction within Zanu PF who have been charged for offences allegedly committed during their time in government.

Kasukuwere, a former loyalist to Mugabe, is out on RTGS$3 000 bail.

He is facing three criminal abuse of office charges with some linked to alleged favours he advanced to former First Lady Grace’s sister, Shuvai Gumbochuma through a hazy land deal and another of contravening the Procurement Act.

The courts ordered the seizure of his home whose title deeds he had surrendered as part of his bail conditions.

The businessman left the country some two months ago ostensibly to seek treatment in South Africa but has remained holed up outside amid continued claims he was still consulting his doctors.

Any return home following his disdainful twitter comments targeted at the most powerful man in the land would likely see attitudes hardening within power corridors, something that could lead to worse off circumstances for the fugitive university law student.

President Mnangagwa has admitted in past comments that he sometimes influences the courts to order the release of suspects.

Writing on his social media pages August last year, Mnangagwa said he had used his influence to secure Tendai Biti’s release on bail when the former MDC top politician was arrested after a blocked attempt to skip the country to seek asylum in neighbouring Zambia.

Biti was being sought for unlawfully announcing election results for which he was later convicted and allegedly inciting violent protests that rocked Harare soon after the July 2018 elections.

Zimbabwean lawyers have also remonstrated with local courts for allegedly taking a deliberate stance to deny freedoms to hundreds of anti-government protesters of January this year with strong beliefs politicians were influencing decisions within courts of law.