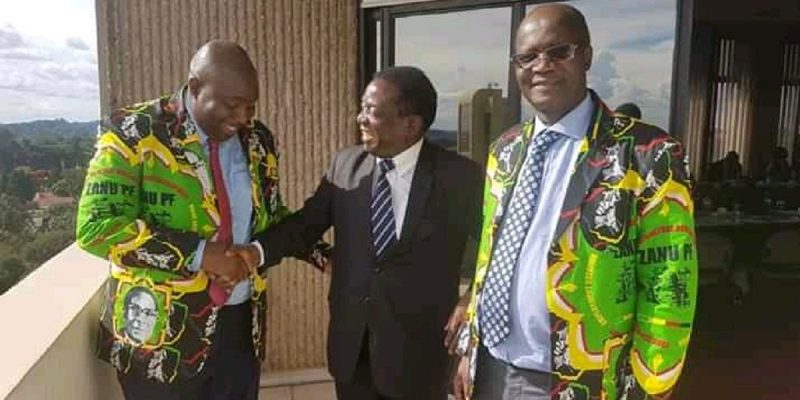 Before the coup...Kasukuwere, Mnangagwa and Moyo
Spread This News

EXILED former cabinet minister Saviour Kasukuwere is making behind the scenes manoeuvres to coax old rival President Emmerson Mnangagwa into accepting him back in Zanu PF.

This was revealed by Norton legislator, Temba Mliswa in a heart-to-heart conversation with business tycoon Kudakwashe Tagwirei.

Mliswa, once Zanu PF top official who continues to maintain close links with his former comrades, said G40 politicians who were smoked out of the ruling party when then President Robert Mugabe was ousted in a 2017 coup, were making overtures to rejoin the party, in the process alienating G40 kingpin Jonathan Moyo.

Kasukuwere is in self-imposed exile in South Africa together with other G40 members Walter Mzembi and Patrick Zhuwao while Moyo is in Kenya.

Mliswa said Kasukuwere had confided in him that he always wanted to work with Mnangagwa.

“Kasukuwere called me yesterday and do you know what he said? ‘I wanted to work nemukoma wako (your brother) Temba but show me who his people are in his cabinet. He (Mnangagwa) even dumped (Patrick) Chinamasa. The only people he has are Oppah (Muchinguri), (Constantino) Chiwenga and Kembo (Mohadi), otherwise the rest (are not his people).

“’Yourself Temba supported Lacoste but none of the current ministers supported Lacoste. So how do you then appoint people who don’t follow party policy because the point of appointment is first of all they have to come from the party’…It was a good question I could not answer,” Mliswa said of his conversation with the former Zanu PF political commissar.

Kasukuwere’s claims come amid reports that other members of the G40 cabal such as former ministers Makhosini Hlongwane and Anastancia Ndlovu had also approached the ruling party seeking readmission.

The group was expelled from the party and recalled from parliament after then Mnangagwa and his military backed faction seized control of Zanu PF and consigned old rivals to political wilderness.