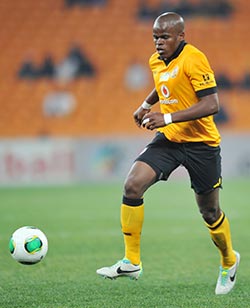 KAIZER Chiefs midfielder Willard Katsande has said that they won’t go into their Platinum Stars’ game thinking that they’ve already won despite being 2-0 up from the first leg.
The Zimbabwe international understands that their two-goal lead could be in jeopardy if Dikwena can score first in the second leg of the MTN8 semifinal at the FNB Stadium on Sunday afternoon.
“The whole team is aware what this game means to the club, that is why we will not be carried away by the 2-0 aggregate score lead. We will go into this one with a clear mind and a clean slate,” said Katsande.
“Anything can happen in the game of football. If we let them score first, it will open up the game and put us under pressure. So, we want to avoid that to happen on Sunday,” he added.
Katsande also revealed that they won’t sit back and protect their lead, but they will keep playing their attacking brand of football as they want to kill this tie off as early as possible.
“We will apply the coach’s game plan to avoid conceding a goal. It is our home game, we will go on an all-out attack in order to kill the contest early in the game.”
“We want to score goals. The fans pay their hard earned money to come to the stadium, and to repay them we must score goals. It is our duty and we need to go to the finals, and a healthy win on Sunday will send another strong message to our opponents,” he continued.
The 27-year-old hard-tackling midfielder, who has started all the games under Stuart Baxter this season, believes that this will be a Cup final before the real final on September 22.
“We are highly blessed to have coach Baxter as our mentor. He asks more from each and everyone in the team. It’s like a Cup final and we are psyched up and inspired for greatness as our theme goes this season,” Katsande concluded.Advertisement