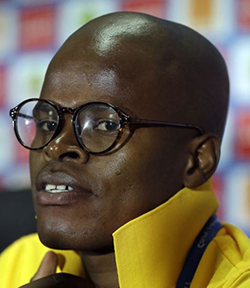 KAIZER Chiefs enforcer Willard Katsande admits his side are downbeat following the MTN8 Final loss to Ajax Cape Town but feels they have the mental strength to bounce back immediately.
The Glamour Boys were unable to defend their Top 8 title in Port Elizabeth, going down 1-0 to the Urban Warriors who lifted their first trophy in seven years.
Katsande says his side were disappointed with the loss, but backs Chiefs to hit straight back in their next league fixture.
“Champions always bounce back,” he told his club’s official website.
“It was upsetting, especially because we wanted to keep the trophy.
“However, we have learnt from our mistakes and our focus is now on defending our Absa Premiership trophy.
“Unlike a cup, which is a sprint, the league is a marathon.”
Chiefs face 15th-placed University of Pretoria on Wednesday and Katsande is not under-estimating the Tshwane outfit.
“We respect Tuks,” he said. “They are a good side, but we will be ready.”
The Zimbabwean then thanked the Khosi faithful for their support despite the Ajax loss and promised to repay their backing with a good performance against Tuks.
“Our supporters were great,” Katsande said.
“They didn’t boo us. Instead, they gave us full support until after the game, despite the disappointing result.
“That’s also why we want to come up with a positive result on Wednesday. We want to reward our fans for always being behind us.
“They give us so much motivation and they always inspire us to do better.”
Following their match-up against Tuks on Wednesday, Chiefs will look to avenge their MTN8 Final defeat when they take on Ajax in a league encounter at Cape Town Stadium on Saturday morning.