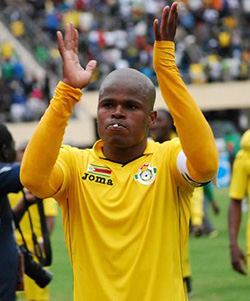 KAIZER Chiefs midfielder Willard Katsande says he has reversed his decision to retire from international football.
Katsande hinted that he was to end his playing days for the Zimbabwean national team after the Warriors crashed out of the 2017 Africa Cup of Nations (AFCON) at the group phase last month.
But the midfield anchorman has now decided that he will continue representing his country for the foreseeable future if selected.
“My chairman (Kaizer Chiefs boss Kaizer Motaung) said ‘son you need to go back and play for your country’ and it was the same message I got from my coach Steve Khompela, Esrom (Nyandoro) and Doctor Khumalo.
“Coach (Callisto) Pasuwa told me that I still had a lot to offer to the national team. Some fans have also come to me and said they would not forgive me if I turned my back on the team and it has been the same story with my family.

“So, I have resolved that I will try my best to help my country to qualify for the 2019 (AFCON) tournament and those qualifiers will be my last piece of action before I retire,” he told the Herald.
He also gave his backing to Pasuwa, who was asked by the Zimbabwe Football Association to vacate his post after the failed AFCON mission.
“I think that’s a big mistake to let coach Pasuwa leave the Warriors. As we all saw he has built a monster of a team with this Warriors squad, he had instilled a winning culture in the Warriors.
“He made everyone fall in love with the Warriors again and I think for the sake of continuity we should have kept him in charge. He knows how to play in the qualifiers, he knows how to win those games and how to motivate the team.
“He makes every individual feel important in the squad. I think we took 20 steps backwards by removing him from the seat because I think the Gabon tournament was a hurtful lesson that we all learnt, we learnt the hard way and now we must make sure the Warriors qualify for the next edition then we talk about going beyond the group stages,” Katsande explained.Advertisement