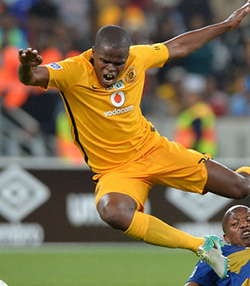 KAIZER Chiefs vice-captain Willard Katsande says the team must not dwell on their poor start to the season and rather work on changing their future.
Amakhosi were knocked out of the MTN8 by new club Cape Town City last night, having also lost their Absa Premiership opener to title rivals Bidvest Wits earlier in the week.
Katsande says it’s back to the drawing board for the Soweto giants, who are eager to impress after a trophyless 2015/16 under coach Steve Komphela.
“There is a lot of pressure on us,” Katsande said after the 1-0 defeat at Cape Town Stadium.
“I mean we came here with our game plan and we started very well. Again, then we conceded a soft goal which killed us. But yeah we tried everything but unfortunately it was not our day. What else can we do? We can’t try to change the past; we can try to change the future. We will go back to the drawing board and work on one or two things.”
The Zimbabwean midfielder was reluctant to assign blame for the cup exit.
“Obviously there were some mistakes but we don’t want to point at one department and say this department let us down. As a team we just need to take responsibility. We need to go back to the drawing board and try to work on our finishing. I think we will come right.”
The Glamour Boys next host Platinum Stars in the league at FNB Stadium on September 14.Advertisement