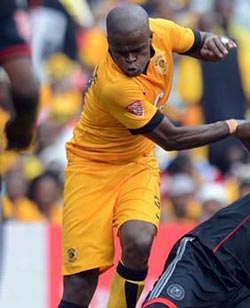 Orlando Pirates 0-1 Kaizer Chiefs
KAIZER Chiefs defeated Orlando Pirates 1-0 in the Soweto derby at FNB Stadium on Saturday thanks to a first goal from Willard Katsande.
Pirates created the first goal scoring chance in the fourth minute when Oupa Manyisa’s cross from the right by-line found the head of Mpho Makola, but his effort to the near post was well-saved by young goalkeeper Reyaad Pieterse.
On 11 minutes the Buccaneers created another opportunity when overlapping left-back Ayanda Gcaba sprung the offside trap and got a shot away from a tight angle, but Pieterse again came up with a good save.
Pirates were the more fluent and forceful team in the first half, pushing Chiefs onto the back foot and limiting them to mere scraps in attack. Bucs created another shooting chance for the adventurous Gcaba in the 34th minute, but his left-footed effort went high and wide.
The tense and bruising first half ended with the sides still locked at 0-0, and the respective defences went into the break knowing that they had enjoyed the better of the battle. Chiefs ‘keeper Pieterse would have been particularly pleased with the way he handles his nerves on derby debut.
Bucs made a change at the start of the second half, throwing Lennox Bacela on in place of Helder Pelembe. However, it was Chiefs who created the next scoring chance and their best of the match to that point, with Reneilwe Letsholonyane shooting over from just inside the penalty area in the 51st minute.
Ten minutes later the Amakhosi broke the deadlock with a first official goal for the club from midfielder Willard Katsande, who was able to head home almost on the goal line from a corner kick by Siphiwe Tshabalala that drifted over the reach of Senzo Meyiwa.
Pirates should have pulled level with just under ten minutes to play when Sifiso Myeni picked out Rooi Mahamutsa from a free kick, but the defender put his header wide of the target with only Pieterse to beat.