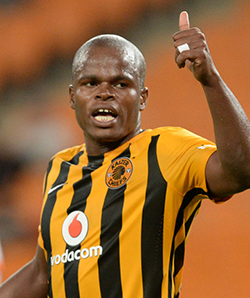 A late Willard Katsande goal helped Kaizer Chiefs beat Polokwane City 3-2 in an Absa Premiership clash at the FNB Stadium in Soweto on Sunday afternoon.
The victory takes the Amakhosi to fourth on the league standings, while Rise and Shine slip down to the fifth spot on the table.
Chiefs saw a lot of the ball in the opening exchanges as they looked to penetrate the Rise and Shine defence in an attempt to break the deadlock.
The first real chance of the game, though, fell to Puleng Tlolane in the 20th minute, but the Polokwane striker volleyed wide of the target from close range.
The visitors were awarded a penalty two minutes later after Katsande fouled Tlolane inside the box and the referee pointed to the spot.
Chiefs goalkeeper Brilliant Khuzwayo produced a great save to deny Polokwane forward Rodney Ramagalela from the resulting spot-kick.
But the former Mamelodi Sundowns striker made no mistake on the half-hour mark as he beat Khuzwayo from 20 yards out to make it 1-0 to Polokwane.
Amakhosi then pushed for the equalising goal and five minutes before halftime, Bernard Parker set up Siphiwe Tshabalala, who forced Polokwane keeper George Chigova into a comfortable save.
Rise and Shine were able to contain Amakhosi until the referee blew the halftime whistle, with the visitors leading 1-0 at the break.
Amakhosi suffered a blow 12 minutes into the second half as influential fullback Ramahlwe Mphahlele sustained an injury to be replaced by Kgotso Moleko.
But Steve Komphela’s side did level matters in the 62nd minute through Parker, who scored with a wonderful diving header to make it 1-1.
The momentum was now with Chiefs and nine minutes later, Parker’s cross found Joseph Molangoane, who gave the home side the lead with his first goal for the club.
Polokwane forward Tlolane had other ideas as the forward grabbed a late equaliser in the 82nd minute beating Khuzwayo with a good finish.
Nevertheless, Katsande proved to be the hero for the home side in stoppage time as the midfielder scored with a fine strike to hand Chiefs a 3-2 victory – ending their seven-match winless run in the process.
Kaizer Chiefs (0) 3 (Parker 62′, Molangoane 71′, Katsande 90+2′)
Polokwane City (1) 2 (Ramagalela 30′, Tlolane 82′) Advertisement