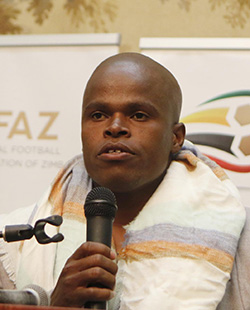 WARRIORS captain Willard Katsande has challenged his team mates to raise the bar and go beyond the group stage of the African Cup of Nations finals in Gabon in January next year.
Katsande said this on Monday night during a dinner hosted for the Warriors by the National Football Association (NFAZ), in Harare following their qualification to the Gabon finals.
The midfielder was also handed the skipper’s arm band on Monday to lead his South African club Kaizer Chiefs next season after sweeping all the awards at the club in the just ended season.
The Warriors captain who narrated the team’s ordeal after enduring a punishing road trip for their opening 2017 African Nations Cup qualifier away to Malawi said they remained united despite the challenge they faced.
“It was not easy but when God says yes, no one says no,” he said.
“We travelled for close to 14 hours by road and we said to ourselves this is the challenge but let’s turn this into opportunity.
“We arrived in the morning just hours before the match but we managed to grind out a result. On Sunday we managed to beat Malawi at home and qualify for the Nations Cup.
“So I want to thank all of you, supporters, sponsors and the National Football Association for the support you gave us.”
He added: “And, for me, as an individual to become one of the captains to lead the team to the African Cup of Nations I cannot express the feeling with my words.”
The Warriors beat the Flames of Malawi 3-0 on Sunday to qualify for the African Nations Cup finals as Group L winners.
It’s the first time for them to achieve that feat since 2006 when Charles Mhlauri led Zimbabwe to the Egypt tournament. Sunday Chidzambwa had led them to the finals in Tunisia two years earlier.
MORE PICTURES FROM SUNDAY’S VICTORY: