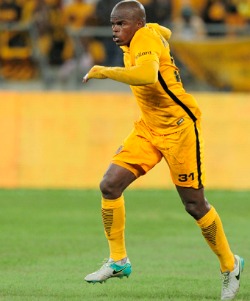 SOUTH Africa: Kaizer Chiefs have confirmed Willard Katsande has signed a new three-year contract at Naturena.
The midfield maestro has proved a vital cog in the Amakhosi machine, although his current deal expires in June, and contract talks between the parties have been lengthy.
However, Chiefs have since confirmed a new deal has been signed with Katsande, who missed a penalty in the 1-1 Soweto Derby draw against Orlando Pirates on Saturday.
Speaking hours before the deal was announced, Chiefs coach Steve Komphela spoke of his desire to retain the midfield engine’s services, while also backing the Zimbabwean to bounce back from his penalty miss.
“We could have won this match, one has to be very honest, as much there were a couple threats, Pirates sat back and were looking hit us on the transition,” he told reporters.
“With regards to the outcome of the match, we performed well. We showed that we wanted to win the match, but we lacked killer instinct. The penalty, that you must take.
“But players miss penalties, he is just missing it at the wrong time and you going home 1-1, are you happy with the result? You can’t be because this is one that you should have won.
“There were scenarios where you could have taken it, When you are fighting for three points, fighting for your life, wanting to win the championship, chances like these you must take.”
Komphela’s charges next face Stellenbosch FC at Athlone Stadium in a last 32 Nedbank Cup clash fixture on Sunday, March 12. Advertisement