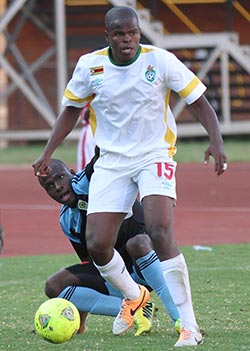 KAIZER Chiefs midfield anchor-man Willard Katsande will captain Zimbabwe in their 2017 Africa Cup of Nations qualifier against Malawi at Kamuzu Stadium in Blantyre on Saturday.
“He is a natural leader and very experienced at this level of the game.
“With him as the leader, I expect discipline from the players both on and off the field of play,” said coach, Kalisto Pasuwa, after conducting the first training session on Wednesday morning.
Katsande himself is delighted.
“It is an honour to captain your national side and I am honoured to get this chance. I hope we win the game.”
Katsande is one of six South Africa-based players who will represent the Warriors against the Flames. Mamelodi Sundowns dominate the squad with three players in the shape of Khama Billiat, Kuda Mahachi and Cuthbert Malajila.
Katsande’s Chiefs team-mate Matthew Rusike had been called into the side but is not available for through injury and that is the same case with Nyasha Mushekwi who suffered an injury in Sunday’s match against Malmo while playing for his side Djurgadens in Sweden.
The Warriors had their second training session at Rufaro on Thursday morning and were due to fly out to Blantyre later in the day.
Apart from Malawi, the Warriors are also in the same group with Guinea and Swaziland, who play on Friday and only one team from the group qualifies for the finals.
The top two placed runners up from all the 13 groups also qualify to join hosts Gabon who qualify automatically.Advertisement