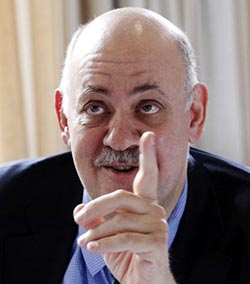 INNSCOR shareholders agreed at an extraordinary general meeting Friday to sell about 9.23 percent of its issued shares, to Ray Kaukonde’s Benvenue Investments to meet the company’s indigenisation targets.
Innscor’s indigenisation plan also involved a second agreement with the Innscor Employee Share Trust for 30 million shares representing 5.54 percent of the company’s current issued ordinary share capital.
The resolution to sell to Kaukonde, who is also a Zanu PF Member of Parliament for Marondera Central, angered some shareholders.
“We don’t view this transaction as fair,” said a representative of the National Social Security Authority, appealing to Innscor to reconsider.
Innscor chief executive John Koumides, who had earlier on praised Kaukonde for helping “steer the company during its 10 to 12-year turbulent times” declined to comment and justify why they chose his company over others.
“We could have gone to NSSA or any other company,” he said, adding that he was “worried” about NSSA’s disapproval of allocation of shares to the employee share ownership scheme which was also approved during the meeting.
Koumides said the company had “a tremendous relationship” with Kaukonde who had in the past also sold them his National Foods shares in exchange for Innscor shares.
The Benvenue Investments transaction shares would be calculated at 75 percent of the volume weighted average price of Innscor Africa shares over the previous 60 trading days, or for the first five years, $1.37 per share and for the second five years, $2.01 per share, whichever is higher.
Last year Kaukonde reportedly disposed of his Spar Western region licence and his two flagship stores, Brooke and Joina Spar to Innscor although it could not be established how much was involved in the deal.
Meanwhile, Koumides dismissed as false recent media reports that Innscor was relocating to Mauritius saying that the company, which has been operating in Zimbabwe for 16 years had no intention to leave.
“We are not relocating to Mauritius, Kenya or Zambia. We only do business in those countries,” he said, adding that banks in Mauritius offered cheap money.Advertisement