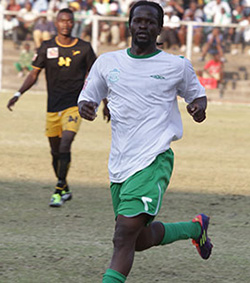 FORMER Zimbabwean international striker Shingi Kawondera has been rated the worst foreigner to play in the South African Premiership since the start of the league in 1996.
According to Kick Off Shingi was one of the imports that were meant to essentially solve the goal-scoring troubles in the league, but they ultimately ended up becoming part of the problem.
Shingi Kawondera (SuperSport United)
The Zimbabwean sits at the bottom of this list; not because he was a terrible player, but down to the fact that he didn’t deliver on the talent he had during his time in South Africa.
There is absolutely no question that Kawondera was a much better footballer than most in this category, but unfortunately not much worked out for him during the one season (2006/07) he spent at SuperSport United.
Following years of being praised as the next big thing to happen to Zimbabwean football, he spent a year across the Limpopo battling to just settle down and is the first to admit that his off-field demons were his biggest weakness in an environment laced with so many temptations.
Though he scored three goals along the way during his stay in Tshwane, it was his lifestyle that let down Pitso Mosimane – the man who had so much belief and trust in him when he recruited him.
Straight after leaving SuperSport, Kawondera left for Cyprus where he played before his once promising career was eventually washed down the drain.
Recent reports have suggested he is now broke with his mental instability forcing him to be admitted into hospital.Advertisement