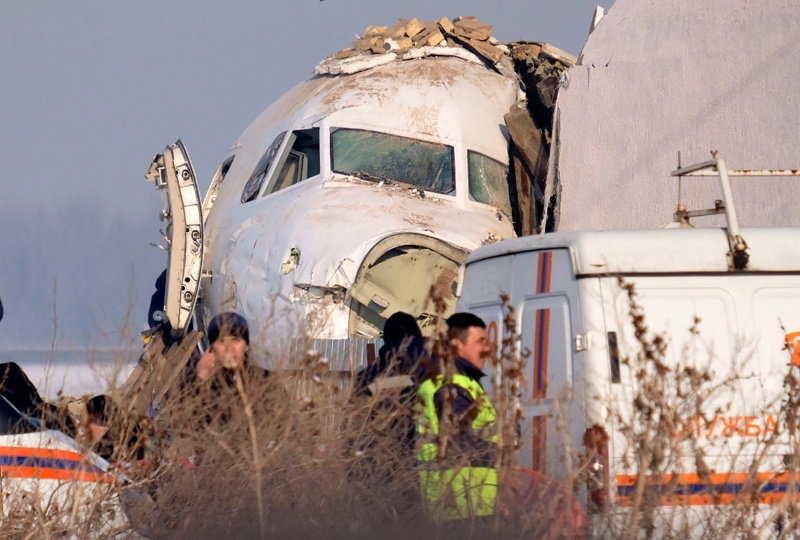 Survivors described walking from the wreckage into the dark and snow.
Spread This News

A passenger jet has crashed in Kazakhstan, killing at least 12 people but leaving dozens of survivors.

The Bek Air plane was flying from Almaty – Kazakhstan’s largest city – to the capital Nur-Sultan when it smashed into a building just after take-off.

The Fokker aircraft had 100 passengers and crew on board. Survivors described walking from the wreckage into the dark and snow.

Dozens are being treated in hospital. The cause of the crash is unclear.

A Reuters news agency reporter close to the scene said there was heavy fog at the time.

The interior ministry initially said 15 people had been killed, but it later published a list of victims that mentioned only 12 dead.

The Fokker 100 plane was carrying 95 passengers – including eight children – as well as five crew, the interior ministry said.

The Flightradar24 information website said the flight departed at 01:21 GMT, and “the last signal was received in that same minute”.

The airport said the plane lost height at 07:22 local time (01:22 GMT), before striking a concrete barrier and crashing into a two-storey building. There was no fire upon impact.

One survivor, businessman Aslan Nazaraliyev, told the BBC that the plane had begun vibrating violently. People screamed and the aircraft smashed into the ground.

He said part of the plane was crushed like “an aluminium can”. He and others managed to get out and helped fellow passengers to safety.

“It was ugly. It was dark. We were lighting with cell phone lights,” Nazaraliyev said.

Sklyar said that most of the passengers who died or suffered serious injuries were in the front part of the plane.

Eight people died at the scene, two while being treated at the airport and two in hospital, AFP news agency reports.

Some 54 people were injured in the accident, nine of them children, the health ministry said. Ten adults are said to be in a critical condition.

Most of those on board were Kazakh citizens although Chinese, Kyrgyz and Ukrainian nationals were reportedly among the injured.

The captain has been confirmed as one of the fatalities.

The editor of the Informburo.kz website said one of its journalists, 35-year-old Dana Kruglova, was killed while flying to see her parents for New Year.