The directive follows a recent incident captured on mobile phone in which a police officer used his baton stick to smash the window of a Bindura bound commuter omnibus resulting in a baby passenger being struck by breaking glass.

The video clip of the incident which occurred along Sam Nujoma Street went viral on social media with initial reports claiming the infant died from the assault.

Subsequent police investigations however dismissed the death rumour although confirming the incident.

Addressing the media Thursday on the state of affairs during the current Covid-19 lockdown period, Kazembe described the incident as “disturbing”.

“My ministry strongly condemns acts of misconduct by police officers which tarnish the image of the government and the police in particular.

“The widely circulated social media clip of a police officer who allegedly struck a baby with a baton stick is a cause for concern.

“I have directed the Commissioner General of Police to take stern action against these and any other errant police officers,” he said. 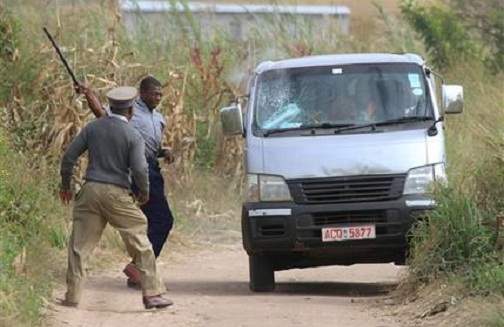 “The Commissioner General of Police has assured me that this message will be cascaded to all Police Commanders for the conscientisation of their members,” he said.

The minister went on to warn bars, restaurants and retail shop owners who continue to operate in direct violation of the Covid-19 lockdown restrictions.

He also urged locals not to abuse the privilege to convene for funerals by respecting the maximum number of attendants which is currently set at 30.

“Police officers will move around all suburbs, shopping centres and even check houses to account for transgressions against Covid-19 regulations and other criminal activities.

“Organisers of such events will face the wrath of the law and risk losing their licences,” he said.