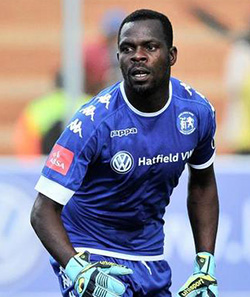 JOHANNESBURG: The eccentric Tapuwa Kapini can entertain and shock with equal measure, traits that make him one of the most colourful goalkeepers in the country.
“Campos”, as Kapini is nicknamed after the animated Mexican ’keeper Jorge Campos, entertained Highlands Park on Wednesday night in Tembisa in their 2-1 win over Ajax Cape Town.
The Zimbabwean scored the winning goal from his own box from a clearance. Compared to the theatrics Kapini is known for, making surging runs from his own box with the ball that either end in tragedy or triumph, this goal, lucky as it was, was more calculated.
“Before the game we spoke that no matter how it comes, we need to get three points,” Kapini said. “We needed to fight for it. Scoring goals isn’t something new to me. But this wasn’t intentional. I was just kicking the ball out. The goalkeeper (Jody February) was out of position.
“It went in and we got the points. When I played for Highlanders (in Zimbabwe), I scored a similar goal from my box. I remember there was one season when I finished with 12 goals because I took penalties and free-kicks.
“But this is for the archives because it helped us get three points.”
The Lions of the North captain joined fellow ’keeper Oscarine Masuluke, who scored two weeks ago.
The Baroka FC number one found the back of the net in dramatic style, in the last seconds of the match with a bicycle kick that stunned Orlando Pirates and the world, ensuring that Bakgaga snatch a point from the Buccaneers.
“I congratulated Oscarine after that goal,” Kapini said.
“I think it’s one of the best goals a goalkeeper has scored. No doubt about it. You have to give him credit because when we go into the box in the final minutes, nobody believes we can do anything.
“They just say, ‘ah, he is a goalkeeper he doesn’t have any skills’. He showed some skills that day.”
Kapini has some skills too, refined from his days as an in-field player before he took up being a goalkeeper. But he never fully let go of those days, prone to making dramatic runs forward from his days at Highlanders, Platinum Stars in Phokeng and AmaZulu.
He has mellowed these days. Last season he was a rock in Highlands’ goal, keeping 17 clean sheets in the league and four more in the play-offs.
This season Kapini has just one clean sheet in 15 matches. That clean sheet came against Chippa United, their next opponents, in the Telkom Knockout.Advertisement

It’s because of their porous defence, the worst in the league, that Highlands find themselves in 13th position, just a point ahead of the bottom two sides, Free State Stars and Baroka FC.
“The problem is that when we score, we sit back and defend,” Kapini said. “We need to change that. If you look at Highlands Park, after we were promoted from the ABC Motsepe League to the NFD we struggled a bit at first. We were almost relegated.
“We did well after that shock and gained promotion to the PSL. It’s the same thing happening now. We are still scared. If we can banish that fear, we will do well. Mark my words, if we go through this period and survive, we will challenge for the league next season.”