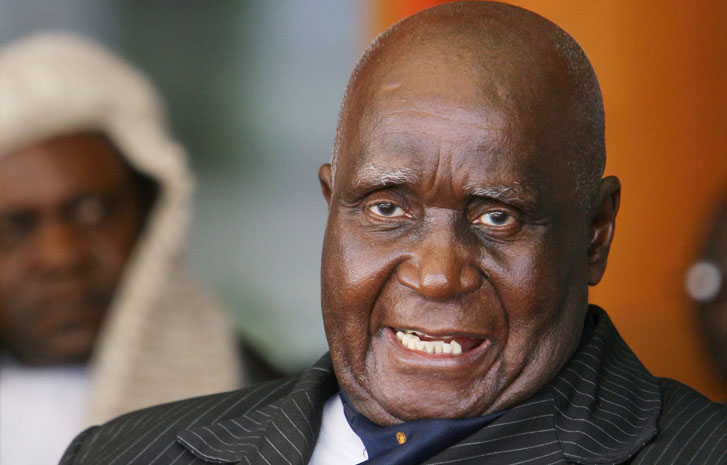 By Gavin Evans – The Conversation

KENNETH Kaunda, the former president of Zambia, who has died in hospital in the capital, Lusaka, at the age of 97, was the last of the giants of 20th century African nationalism.

He was also one of the few to depart with his reputation still intact. But perhaps more than any of his contemporaries, the standing of the man who ruled over Zambia for 27 years is clouded with ambiguity.

The charismatic president who won accolades for bowing out peacefully after losing an election was also the authoritarian who introduced a one-party state. The pioneer of “African socialism” was the man who cut a supply-side deal with the International Monetary Fund (IMF). The nationalist leader known for personal probity planned to give huge tracts of farmland to an Indian guru. The revolutionary who gave sanctuary to liberation movements was also a friend of US presidents.

I met him in 1989 when I helped organise a delegation of 120 white South African notables for a conference with the then-banned and exiled African National Congress, which was fighting for the liberation of black South Africans, in Lusaka. “KK”, as he was known, shed tears as he welcomed guests, who included the liberal MP Helen Suzman, known for her defiant opposition to the apartheid government.

By then, he’d been president for a quarter of a century and seemed a permanent fixture at the apex of southern African politics. And yet, as it turned out, he was on his final lap.

He exuded an image of the benign monarch, a much-loved father to his people, known for his endearing quirks – safari suits, waving white handkerchiefs, ballroom dancing, singing his own songs while cycling, and crying in public. And yet there was also a hard edge to the politics and persona of the man, whose powerful personality helped make Zambia a major player in Africa and the world for three decades.

Kenneth David Kaunda was born in Chinsali, Northern Zambia, on October 24, 1924. Like so many of his generation of African liberation leaders, he came from a family of the mission-educated middle class. He was the baby among eight children. His father was a Presbyterian missionary-teacher and his mother was the first qualified African woman teacher in the country.

He followed his parents’ profession, first in Zambia (then Northern Rhodesia), where he became a head teacher before his 21st birthday. He also taught in then Tanganyika (Tanzania), where he became a lifelong admirer of future president Julius Nyerere, whose “Ujamaa” brand of African socialism he tried to follow.

After returning home, Kaunda campaigned against the British plan for a federation of Southern Rhodesia, Northern Rhodesia, and Nyasaland, which would increase the powers of white settlers.

He took up politics full-time, learning the ropes through working for the liberal Legislative Council member, Sir Stewart Gore-Browne. Soon after, as secretary-general of the Northern Rhodesian African National Congress, he was jailed for two months with hard labour for distributing “subversive literature”.

After his release he clashed with his organisation’s president, Harry Nkumbula, who took a more conciliatory approach to colonial rule. Kaunda led the breakaway Zambian African National Congress, which was promptly banned. He was jailed for nine months, further boosting his status.

A new movement, the United National Independence Party (UNIP), chose Kaunda as its leader after his release. He travelled to America and met Martin Luther King. Inspired by King and Mahatma Gandhi, he launched the “Cha-cha-cha” civil disobedience campaign.

In 1962, encouraged by Kaunda’s moves to pacify the white settlers, the British acceded to self-rule, followed by full independence two years later. He emerged as the first Zambian president after UNIP won the election.

The challenges of independence

One challenge for the newly independent Zambia related to the colonial education system. There were no universities and fewer than half a percent of pupils had completed primary school. Kaunda introduced a policy of free books and low fees. In 1966 he became the first chancellor of the new University of Zambia. Several other universities and tertiary education facilities followed.

Long after he was ousted as president, Kaunda continued to be warmly received in African capitals because of his role in allowing liberation movements to have bases in Lusaka. This came at considerable economic cost to his country, which also endured military raids from the South Africans and Rhodesians.

At the same time, he joined apartheid South Africa’s hardline prime minister BJ Vorster in mediating a failed bid for an internal settlement in Rhodesia (Zimbabwe) in 1975. He attempted the same in South West Africa (Namibia), which was then administered by South Africa. But President PW Botha, who succeeded Vorster after his death, showed no interest.

Kaunda helped lead the Non-Aligned Movement, which brought together states that did not align with either the Soviets or the Americans during the Cold War. He broke bread with anyone who showed an interest in Zambia, including Romania’s Nicolai Ceausescu and Iraq’s Saddam Hussein, while also cultivating successive American presidents (having more success with Jimmy Carter than Ronald Reagan).

He invited China to help build the Tazara Railway and bought 16 MIG-21 fighter jets from the Soviet Union in 1980.

Kaunda’s economic policy was framed by his belief in what he called “African humanism” but also by necessity. He inherited an economy under foreign control and moved to remedy this. For example, the mines owned by the British South African Company (founded by Cecil John Rhodes) were acquired as a result of colonial conquest in 1890. Kaunda’s threats to nationalise without compensation prompted major concessions from BSAC.

He promoted a planned economy, leading to “development plans” that involved the state’s Industrial Development Corporation acquiring 51% equity in major foreign-owned companies. The policy was undermined by the 1973 in the spike in the oil price and fall in the price of copper, which made up 95% of Zambia’s exports.

The consequent balance of payments crisis led to Zambia having the world’s second highest debt relative to GDP, prompting IMF intervention. Kaunda at first resisted but by 1989 was forced to bow to its demands. Parastatals were partially privatised, spending was slashed, food subsidies ended, prices rocketed and Kaunda’s support plummeted.

Like many anti-colonial leaders, he’d come to view multi-party democracy as a western concept that fomented conflict and tribalism. This view was encouraged by the 1964 uprising of the Lumpa religious sect. He banned all parties other than UNIP in 1968 and Zambia officially became a one-party state four years later.

His government became increasingly autocratic and intolerant of dissent, centred on his personality cult. But Kaunda will go down in history as a relatively benign autocrat who avoided the levels of repression and corruption of so many other one-party rulers.

Julius Nyerere, who retired in 1985, tried to persuade his friend to follow suit, but Kaunda pressed on. After surviving a coup attempt in 1990 and following food riots, he reluctantly acceded to the demand for a multi-party election in 1991.

His popularity could not survive the chaos prompted by price rises and was not helped by the revelation that he’d planned to grant more than a quarter of Zambia’s land to Maharishi Mahesh Yogi (who promised to create a “heaven on earth”). The trade union leader Frederick Chiluba won in a landslide victory in 1991.

Kaunda won kudos abroad for what was considered to be his gracious response to electoral defeat, but the new government was less magnanimous. It placed him under house arrest after alleging a coup attempt; then declared him stateless when he planned to run in the 1996 election (on the grounds that his father was born in Malawi), which he successfully challenged in court. He survived an assassination attempt in 1997, getting grazed by a bullet. One of his sons, Wezi, was shot dead outside their home in 1999.

The 1986 AIDS death of another son, Masuzgo, inspired him to campaign around HIV issues far earlier than most, and he stepped this up over the next two decades. After Chiluba’s departure, he returned to favour and became a roving ambassador for Zambia. He reduced his public role following the 2012 death of his wife of 66 years, Betty.

Kaunda will be remembered as a giant of 20th century African nationalism – a leader who, at great cost, gave refuge to revolutionary movements, a relatively benign autocrat who reluctantly introduced democracy to his country and an international diplomat who punched well above his weight in world affairs.