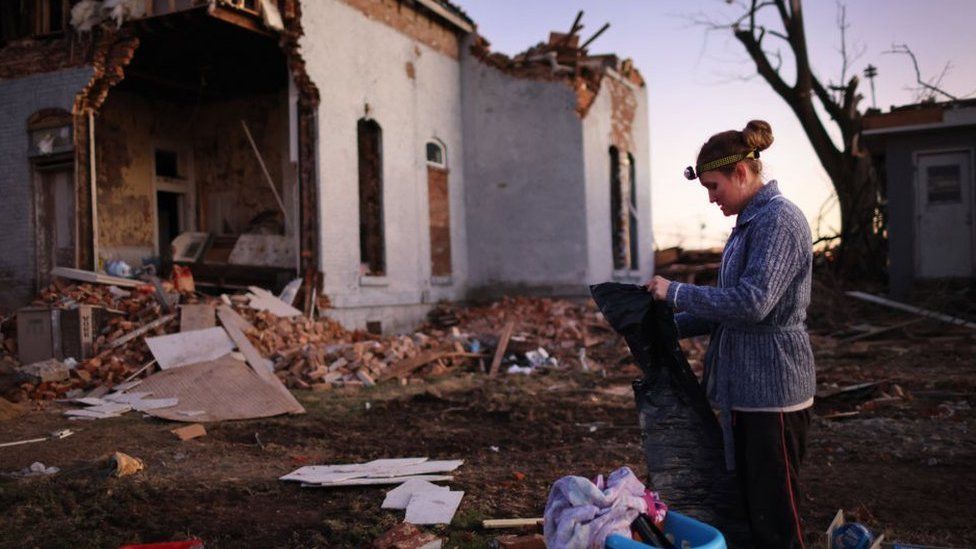 THE death toll from powerful tornadoes that devastated towns in Kentucky is likely to pass 100, the governor says, as hope of finding survivors wanes.

Andy Beshear said this was the most devastating tornado event in the state’s history, with at least 80 confirmed deaths.

“Nothing that was standing in the direct line of [one] tornado is still standing,” he said.

Fourteen deaths have been reported in four other states.

President Joe Biden has declared a major federal disaster in Kentucky and ordered federal aid to be made available to the hardest-hit areas.

Rescue workers scoured debris for survivors while teams distributed water and generators to residents. More than 300 members of the National Guard were going door to door and removing debris.

Eyewitness: ‘I don’t know how anybody could’ve lived’.

“We’re still hoping as we move forward for some miracles to find more people,” the governor said during a visit to the town of Mayfield, one of the hardest hit.

However, no-one has been found alive since Saturday morning.

Beshear said a tornado had wrecked places all along its 227-mile (365km) path. Thousands of people had their homes destroyed though the exact number was still not clear.

Previously, the longest a tornado had travelled along the ground in the US was a 219-mile storm in Missouri in March 1925 that claimed 695 lives. Such major events outside of the spring and summer months are extremely rare.

In Mayfield, the fire station and the city hall were flattened. “I don’t think there’s a pane of glass in any vehicle or property that the city owns that isn’t shattered,” Mayor Kathy Stewart said.

Eight deaths were confirmed at a candle factory that was hit when 110 employees were believed to be inside, a spokesperson for the company told Reuters news agency. Eight other people were still missing.

Kyanna Parsons Perez, a factory worker who made a desperate plea for help on Facebook from under the wreckage, told the BBC that other businesses had shut down for the storm and staff there should not have been at work.

In Illinois, six people were killed in a collapsed Amazon warehouse in Edwardsville and more were still missing.

Four deaths were confirmed in Tennessee while two people were killed in Arkansas, one of them in a nursing home after it partly collapsed. One death was confirmed in Missouri.

President Joe Biden said he would ask the Environmental Protection Agency to examine what role climate change might have played in the storms.