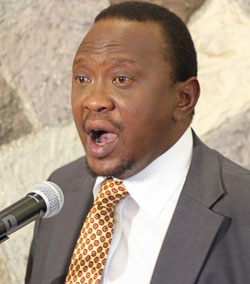 KENYA signed deals worth $5 billion with China on Monday to construct a railway line and an energy project, deepening ties with the Asian country keen to expand investment in Africa.
The cash would be spent on energy projects, a standard gauge railway linking the port of Mombasa in east Africa’s biggest economy to its border town of Malaba, meant to provide faster access from Kenya’s port to markets in the region, the presidency’s media service said in a statement on Monday.
The rest would be used to improve wildlife protection, in a country where well-armed criminal gangs have killed elephants for tusks and rhinos for their horns that are often shipped mainly to China for use in ornaments and medicines.
It was not specified whether the cash was a loan or grant, or whether this was all new money or part of a previously negotiated but unannounced package.
The deals were agreed in Beijing after talks by Kenya’s new President Uhuru Kenyatta and President Xi Jinping. Kenyatta is on a state visit to China scheduled from Sunday to Friday.
During his first visit to Africa in March, Xi pledged to help the continent develop, responding to concerns that China is only interested in shipping out the continent’s raw materials.
China is already key player in Kenya, constructing capital-intensive flagship projects, mostly roads.
Kenyatta’s visit follows a promise he made during the presidential election campaigns preceding the March 4 vote.
He vowed to work closely with China following comments by United States, Britain and some European officials who said they would limit contacts with Kenyatta should he win owing to his indictment for crimes against humanity at The Hague.
Kenyatta and his deputy William Ruto both face trial at the International Criminal Court for helping orchestrate the bloodshed that followed the disputed 2007 election. They both deny the accusations, and pledged to clear their names.
On Monday, Xi said China supports Kenya’s quest for industrialization and plans to host a clearing house for the Chinese renminbi currency in Nairobi, as part of Kenya’s plans to become an international financial hub.
Kenyatta urged China to invest in Kenya’s newly discovered oil sector, power generation, a technology city near the capital city and a new port in Lamu, north of Mombasa.Advertisement

The $25.5 billion Lamu project would link landlocked South Sudan and Ethiopia to the Indian Ocean port of Lamu by constructing a major highway, a railway and an oil pipeline.