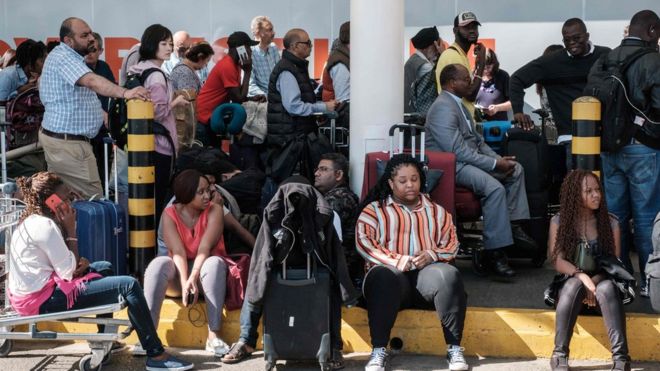 Thousands of passengers have been stranded in Kenya’s four main airports after a strike by workers caused a major disruption to flights.

Workers say they are unhappy over a planned merger between the airport authority and the national airline.

About 60 flights have failed to take off at Jomo Kenyatta Airport – East Africa’s largest. Some planes reportedly left without passengers.

Airports in Mombasa, Eldoret and Kisumu are also disrupted.

The government has condemned the strike as illegal. It says replacement workers will be brought in to normalise the situation.

Riot police were deployed and tear gas was fired at striking workers at the capital’s main airport, local media say.

It began at midnight local time on Wednesday.

Fire engines were withdrawn from the runway, and security, check-in and baggage-handling staff also stopped working.

The unions are opposed to a plan that would see the loss-making Kenya Airways taking over the management of airports from the profit-making Kenya Airports Authority (KAA).

The workers say the proposed take-over would put their jobs at risk.