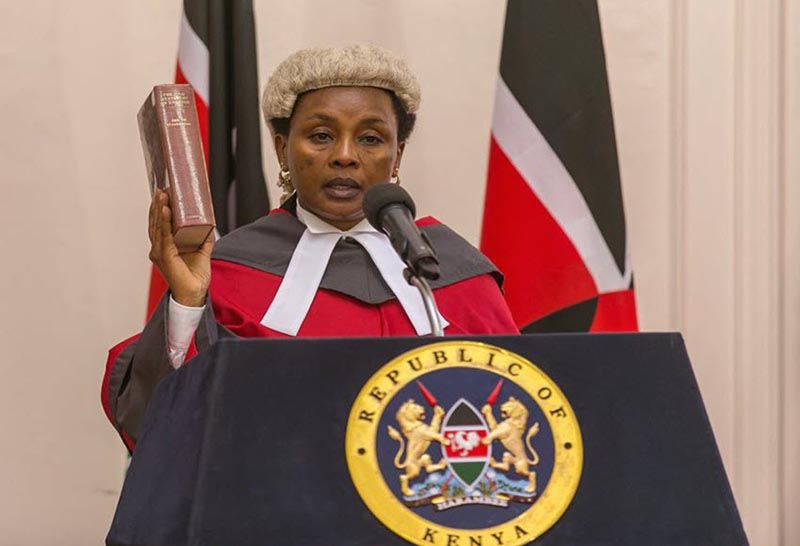 Philomena Mwilu is one of seven members of the Supreme Court, and was among the judges who nullified President Uhuru Kenyatta initial election win in August 2017, leading to the controversial holding of a fresh vote.

Kenya’s director of public prosecutions Noordin Haji told journalists there was evidence she had abused her office for personal gain and accepted money as a gift in dubious circumstances.

She is also accused of failing to pay taxes and executing a security belonging to the Imperial Bank – which collapsed in 2015 – under false pretences.

“This afternoon, I informed Chief Justice David Maraga of my decision to grant consent for the arrest and prosecution of the deputy chief justice, Lady Justice, Philomena Mbete Mwilu, on criminal charges,” said Kenya’s director of public prosecutions Noordin Haji

“This decision has not been taken lightly,” he added, saying “the dignity and independence of the judiciary is dear to us.”

Haji issued a warning to judges and investigators who, “use their position to enrich themselves at the expense of the Kenyan people.”

Mwilu was appointed to the Supreme Court in 2016 and shot into the limelight for her role in annulling Kenyatta’s first poll win last year.

In October, Mwilu’s bodyguard was shot and killed the day before the Supreme Court was to hear a petition to postpone the re-run.

As a result, Mwilu did not attend the hearing and the lack of a quorum meant the election went ahead unchallenged.

Haji said her arrest was part of an ongoing crackdown against corruption, which has seen several high-ranking officials hauled into court, a rarity in graft-wracked Kenya whose citizens rarely see justice done.

“Many other cases are under investigation … and Kenyans should expect fresh investigations and prosecutions on a regular basis,” he added.

Asked by a journalist whether Mwilu’s prosecution was related to Kenyatta’s threat to “fix the judiciary” after the annulment of his initial election, Haji insisted the decision was independently taken.

“We are an independent institution and we are not being directed by anyone or by any statements given out there, this decision was made independently of all other matters and factors,” he said.