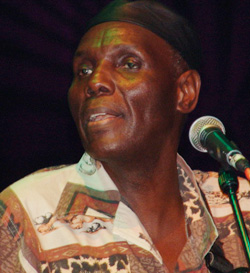 KENYA: Legendary Zimbabwean musician Oliver “Tuku” Mtukudzi thrilled music lovers in the Lake Victoria city of Kisumu as he took to the stage at the Acacia Premier Hotel last Saturday.
While the famous musician is not new to Kenya, the weekend show was his first performance in the lakeside city, and outside Nairobi.
“This is truly an honour for me to be back in Kenya again. Every time I come here I am amazed by the love the Kenyan people show me,” said Tuku.
Popularly known for his hit song Todii, the 63-year-old was on point to offer the much needed music entertainment to the excited fans.
During his performance, he belted some of his popular jams including Todii, Neria, Hear Me Lord, Ziwere, Chiri Nani, Tozeza and Tsika Dzedu.
Tuku, who so far has a total of 56 albums, began performing in 1977 when he joined the Wagon Wheels, a band that also featured Thomas Mapfumo.
Known for his husky voice, he is considered Zimbabwe’s most renowned and internationally recognised cultural icon of all time.
The show also featured performances from Kisumu 100 hit-singer Suzanna Owiyo and comedian and radio personality Jalang’o.Advertisement